Elk in Tehachapi: where did they come from? 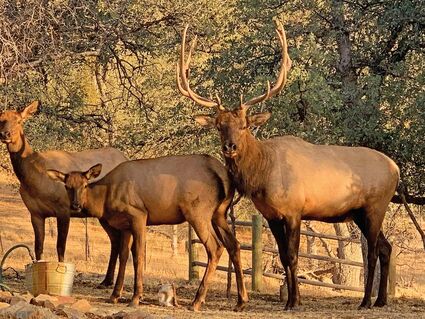 Among the most charismatic – and largest – wildlife in the Tehachapi Mountains are the American Elk (Cervus canadensis nelsoni) that can be seen in outlying areas. These huge deer are impressive creatures, about the size of horses, and the bulls grow spreading antlers each year.

You may wonder where these picturesque animals came from, and if they’ve always been here. They now wander the areas of Bear Valley Springs, Stallion Springs, Golden Hills, and the mountains south of Highline Road in a range that seems to be expanding. Let me explain the back story.

Elk have been found in the Tehachapi Mountains for thousands of years, and the local First Nations people, the Nuwä (Kawaiisu or Southern Paiute) have a word in their language for elk: parahui, pronounced pah-rah-HOO-ee, which means “water deer.” This is apt, because unlike most California Mule Deer, elk enjoy being in water during hot weather and seem to have no qualms about wading right into a lake or pond.

However, in those earlier centuries, the elk subspecies found in this area was the Tule Elk (Cervus canadensis nannodes), a smaller elk that may once have numbered more than 500,000 animals in the Central Valley and the grassy foothills that surround it, including the Tehachapis. Though considered a slightly smaller subspecies, mature Tule Elk bulls on good range can still weigh in at 700 to 800 pounds or more.

However, indiscriminate hunting and habitat conversion decimated Tule Elk until they were thought to be extinct by 1870. However, in 1874 a game warden named A.C. Tibbett discovered a single bull and a lone cow concealed in the tule marshes of Buena Vista Lake in Kern County, on property owned by land baron Henry Miller.

Miller ordered the elk protected, and their numbers grew slowly, with some fluctuations and setbacks. Now they number more than 5,000 animals statewide, and Tule Elk have been reintroduced to the Tehachapi Mountains at the Wind Wolves Preserve, on land owned by the Wildlands Conservancy.

The elk that we see in our local valleys, however, have a different origin. They are an elk subspecies known as Rocky Mountain Elk or American Elk, and they were imported here around 1966.

They were reportedly purchased from Yellowstone National Park by the sprawling Ellsworth Ranch, in what is now Stallion Springs, and most if not all were thought to be from the Yellowstone gene pool.

Approximately 400 elk were purchased, although some died in transit and others in the first couple of years. They were trucked to a one-square mile (640-acre) enclosure on the Ellsworth Ranch.

The terrain and geography were different from Yellowstone, and the elk did not immediately start thriving. They were contained by a tall, strong fence, but one night a gigantic oak tree blew down and crushed a section of the enclosure.

By this time the herd was down to 100 to 200 animals, and most left the enclosure, which was later dismantled. The elk seem to have struggled for the first few decades, but are apparently doing better now, because their numbers and range seem to be increasing.

The ranch imported the elk in the hopes of one day realizing income by charging visitors to hunt them. That hasn’t happened locally, since most areas don’t allow hunting, but elk have definitely become established at the nearby 270,000-acre Tejon Ranch, and the company hosts expensive elk hunts every year.

During the summertime, cow elk have their calves and tend to stay with other cows and their offspring. The bulls frequently form “bachelor herds” without cows, and the boys seem to get along very amicably, spending their days lounging and grazing.

In August, however, the annual rut, or mating season, begins, and the bulls no longer enjoy each other’s company. A big mature bull will attempt to form a harem with up to 20 cows. A cow is in estrus for only about 12 to 15 hours every three weeks or so, so there is a narrow window of opportunity for a bull to successfully mate with a cow.

Consequently, a dominant bull will try to keep a close eye on the cows in his harem and prevent competing bulls from coupling with them. Maintaining a harem is exhausting work and a vigilant bull has little time to eat, so they are often underweight and malnourished by the time the rutting season ends.

The rut is underway now in the Tehachapi Mountains, and you can sometimes hear the bulls making their strange whistling shrieks, which is known as “bugling.” 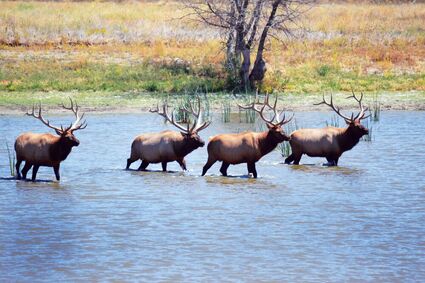 The elk in our mountains are magnificent creatures, and I’m glad that they are here and appear to be enjoying continuing success. They can cause damage to gardens and farm crops, but fortunately most of them do not. They shouldn’t be approached, but you can usually observe them from a distance without frightening them. Even if you’ve seen them many times before, the sight of an elk is still impressive.