(Note: This is the 22nd article in a continuing series about local military veterans and their service to our great country.)

John came into this crazy, mixed-up world on January 28, 1917, born in Globe (Gila County), Arizona to John and Willhelmina Farnham Pruden. He came of age during the hardships of the Great Depression, serving for a year with the Civilian Conservation Corps building fire roads in Southern California (including in the San Gabriel Mountains).

He enlisted in the Navy in 1935. While no information was available about his early years in the Navy, during World War II he first served aboard the USS Dewey (DD-349), a Farragut-class destroyer escort. On December 18, 1944, while supporting the invasion of the Philippines, the Dewey sustained heavy damage in a typhoon, an ordeal that ended with the battered vessel still afloat, but having lost all power, listing more than 75 degrees and losing her number one stack; it was torn off and thrown against the boat deck!

Although the USS Dewey was repaired and returned to service in early 1945, John, now a Lieutenant Junior Grade Assistant Gunnery Officer, was reassigned to the USS Hadley (DD-774), a new Sumner Class destroyer boasting a number of improvements over the standard Fletcher-class destroyers, among them twin 5-inch/38 caliber gun mounts, dual rudders, additional anti-aircraft guns and an advanced fire-control system for more efficient gunnery operations.

In the spring of 1945, the Dewey was operating off the coast of Okinawa, supporting the invasion of this Japanese home island that began on April 1 and signified the largest amphibious assault by U.S. and Allied forces in the Pacific Theater during WWII. It was during this time that the Dewey, like so many other U.S. and Allied warships, came under attack from Japanese kamikaze aircraft, which conducted desperate suicide attacks against our naval vessels in the closing stages of the Pacific campaign. Some 3,800 kamikaze pilots would lose their lives, along with more than 7,000 Allied Naval personnel.

Which brings us to that tragic yet unforgettable day: May 11, 1945. Fighting alongside the USS Evans (Fletcher-class destroyer, DD-552), the Hadley made history on this day, shooting down 23 kamikazes in a 95-minute air/sea battle, while enduring five hits from planes and bombs and suffering 151 casualties, including 30 shipmates killed in action. The 23 planes shot down by the Hadley remains an all-time naval record for a single engagement, and earned the valiant ship the sobriquet "The Champion Kamikaze Killer."

For its actions, the ship and crew were awarded a Presidential Unit Citation, which described the events of May 11 in graphic detail:

"CITATION: For extraordinary heroism and action as Fighter Direction Ship on Radar Picket Station Number 15 during an attack by approximately 100 enemy Japanese planes, forty miles northwest of the Okinawa Transport Area on 11 May 1945. Fighting valiantly against waves of hostile suicide and dive-bombing planes plunging toward her in all directions, the USS HUGH HADLEY sent up relentless barrages of anti-aircraft fire during one of the most furious air-sea battles of the war. Repeatedly finding her targets, she destroyed twenty planes, skillfully directed the Combat Air patrol in shooting down at least 40 others and, by her vigilance and superb battle readiness, avoided damage herself until subjected to a coordinated attack by ten Japanese planes. Assisting in the destruction of all ten of these, she was crashed by one bomb and three suicide planes with devastating effect. With all engineering spaces flooded and with a fire raging amidships, the gallant officers and men of the HUGH W. HADLEY fought desperately against insurmountable odds and, by their indomitable determination, fortitude and skill, brought the damage under control, enabling their ship to be towed to port and saved. Her brilliant performance in the action reflects the highest credit upon the HUGH W. HADLEY and the United States Naval Service."

In addition to the coveted Presidential Unit Citation, the Hadley's crew was awarded 121 Purple Hearts and 20 other individual medals. One of those medals was a Silver Star awarded to Lieutenant Pruden for his leadership and courage, as he had led a fire-fighting party that subdued a fire resulting from the kamikaze attacks.

After the war, John elected to make a career in the Navy. In the late 1940s he served aboard heavy cruisers at several stations on both the east and west coasts; much to the dismay of his three young children, who found themselves constantly uprooted as they moved from place to place. As his surviving son, John H. Pruden (also a proud Navy veteran) recalls: "My father was so proud to serve in the Navy, and he did whatever the Navy asked him to do. He had gone through the Depression; you couldn't find a job in the 1930s. And the Navy helped him to complete his education and took care of and supported his family."

John served in the Korean War with the heavy cruiser USS Los Angeles. Later, the Navy sent him to college, and he graduated from the University of Washington. He also attended the War College and the Defense Language Institute at the Presidio of Monterey. After more than 22 years of distinguished service, John retired from his beloved Navy in the late 1950s, having attained the rank of full commander. 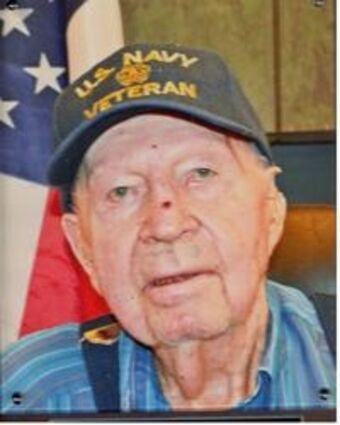 In civilian life, John managed a California Unemployment Office in Santa Maria, later, he worked as a general foreman for an RV park in Temecula.

John passed away in Tehachapi on February 15, 2015 at the age of 98. He was laid to rest at the Bakersfield National Cemetery in Arvin. He is survived by his son, John H. and Susan Pruden; his daughter, Joan Ferragamo; and by a veritable stable of grandchildren, great-grandchildren, nieces and nephews.