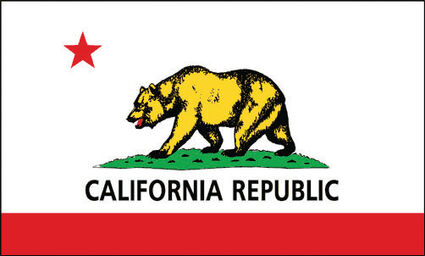 When you find that someone who should remember has forgotten your birthday, you say, "Oh, don't worry about it. That's OK." What you really mean is, "YOU FORGOT MY BIRTHDAY!" California was admitted to the Union as the 31st state on Sept. 9, 1850 but we Californians seldom take note. In fact, we're lucky if it is ever mentioned in the evening news. When I mention it to someone they usually say they were not aware of it at all.

Being an old time Californian I always think of our state's birthday. Some other states in the Union declare it a state holiday with cheering, speeches and the band out playing. Why don't we? You'd think that with nearly forty million state population we'd rate at least give a single "hip hip hooray."

The Golden State just passed its 171st birthday. I hope someone gave that grizzly bear on our state flag a friendly wave. I'd like to say, a friendly pat on the head but it's better to wave to a grizzly bear, although there's no grizzlies in the state, anymore.

It is surprising that Congress was even interested in the piece of real estate so many thousands of miles from the rest of the existing states of the Union. One may ask, "Did it have anything to do with the gold discovery at Sutter's Creek in 1848?" Congress said, no – who would want to have an interest in a gold mine? – but hordes of people coming by wagon, horseback and even on ships from foreign countries traveled here to strike it rich. As the news spread across the country some 80,000 people searching for gold populated the state.

Congress did hurry things along by omitting the usual tradition of first declaring our state a territory. This was explained that it was admitted, under the Compromise of 1850, as a free state; a non-slavery state. With the Civil War still ten years away, it sounds as if they were already choosing up sides. Still, one cannot help but think that the lure of the yellow metal, gold, did help in the statehood decision.

The Gold Fever rush ended years ago and many people say they would never want to live here. With a state population of some thirty-nine million, who needs them? Sunny California still packs them in. Gold Fever, Spring Fever, Hay Fever, whatever!

By the way, a friend of mine just told me it is a legal holiday in California. Obviously, a very quietly uncelebrated day. On Sept. 9 some of us observed our 171st year as a state and the 31st star on the American flag is up there for all to see with our state flag flying just below and "Grizzly Cal" right where he belongs.