My parents were married in 1927 and lived through the Great Depression. My father learned at an early age to fix things and keep them working: tractors, cars, vacuum cleaners, washing machines or whatever. It was a work ethic that he and my mother passed on to my brothers and me, and I tried to pass it on to my children. When you have something of value, you take care of it and make it last.

I remember having great difficulty in understanding the whole idea behind the "cash for clunkers" program. Being green is one thing and then there is being wasteful. The cars that were called "clunkers" were nicer than the car I drove. They intentionally drained the oil out of a well running engine and replaced the oil with a liquid that seized the engine, basically killing it. Then they smash or shredded the car. My dad would have had tears in his eyes if he had been alive to watch this happen.

I love machines, cars, airplanes, trains, helicopters, trucks, you name it! I enjoy the sound and feel of horsepower. I grew up listening to my dad and brothers talk about engines. I learned to identify different aircraft when I was only four-years-old.

I remember vividly seeing a photograph of an F-86 on the front page of the newspaper in 1950. The headline exclaimed the victory of the first American jet to down an enemy MiG-15. Lt. Col. Bruce Hinton, USAF, shot down the first MiG-15 with an F-86A, on December 17, 1950.

I thought The North American F-86 Sabre was the most beautiful airplane I had ever seen!

The photo below shows my husband, Al's, F-86E nose to nose with a MiG-15 at Mojave Airport.

Comparisons between the F-86 and MiG-15 were always made by the pilots on both sides. The MiG was able to fly higher and always had the advantage for the start of battles. The MiG had a better rate of climb, and thrust to weight ratio, also the armament was superior, as they carried one 37-mm and two 23-mm cannons, compared to six 50-caliber machine guns in the F-86.

Russian pilots later admitted that the F-86 had better fuselage aerodynamic form, gained speed faster in a dive, and had lesser sink rate when recovering from a dive. 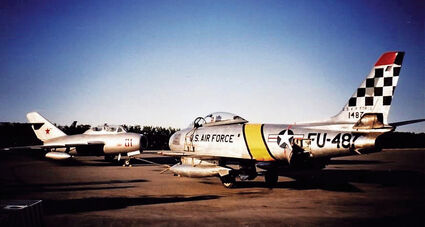 The F-86s that Al has owned were built by Canadair and had the Avro Orenda-14 engine with 7,500 pounds of thrust. Originally, F-86s were designed and built by North American Aviation, but Canadair Ltd. of Canada signed an agreement with North American in August 1949 to build Sabres.

Al recently sold his Mk-VI Sabre, so she won't be on the flight line anymore during Plane Crazy Saturday. We miss her, but will always have the sweet memories of seeing her fly in years gone by.