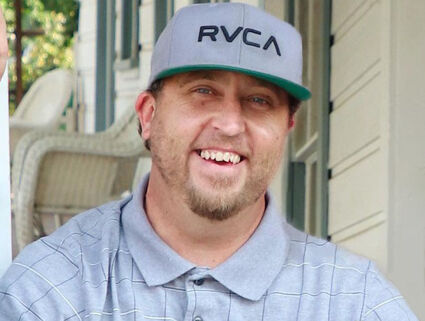 Daniel Dwayne Sterk went to be with his Lord Jesus on August 7, 2021 at his home in Tehachapi, California.

Danny was born on September 28, 1978 in Bellflower, California to Dennis and Sharon Sterk. Shortly after his birth, the family moved to Bear Valley Springs in Tehachapi. He graduated from Tehachapi High School in 1996, where he played football, was on the golf team, was a member of the band and, because he was always the life of the party, his peers loved him and voted him THS Homecoming King his senior year. Throughout his youth he enjoyed skateboarding and riding dirt bikes.

He was also active in the Tehachapi Nazarene Church youth group where he grew his faith in God, and started his Christian band, The Naked Truth. Later he played with Hard Pressed, Close To Home, and others with close friends from his hometown and college. He was also a part of the Bones of Brundage Bakersfield music scene. In recent years he played drums for the Christian Life Assembly Worship Band.

In spite of his struggles with Multiple Sclerosis, he was an amazing father, son and brother. He felt his greatest accomplishment was his children, Evan and Savanna. He had a gift for loving and accepting people, and added joy to their lives with his sense of humor. He proudly held the self-proclaimed title of "Tehachapi's Best Driver," "#1 Dodger Fan" and "Grammar Nazi" on Facebook where he surely held the record for the most time in "Facebook jail."

Danny is survived by his son, Evan Sterk and Evan's girlfriend Katie Garret, his daughter Savanna Sterk, parents Dennis and Sharon Sterk, siblings Stefani and Scott Parks, Matthew and Jennifer Sterk, nephews and nieces Kyle and Madisann Parks, Joshua and Carly Sterk, and many other loving family members, and his love Alandis Burson and her children Alius, Azail and Adaliah.

He was preceded in death by his grandparents, Ronald and Ann Sterk, Lessie and Evelyn Walker, and cousins Darryll Pettitt and Anthony Nipps.

He will be sorely missed by all who loved him.

"Jesus has his hands full now."

Wood Family Funeral Service, Tehachapi California, has been entrusted with his care. For information on services and condolences please visit http://www.woodmortuary.net.