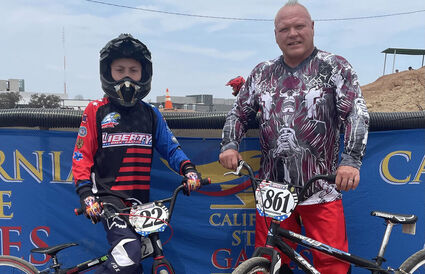 Local Team Liberty BMX racers recently competed in the California Summer State Games held in San Diego on July 24 at San Diego BMX. The Games are set up to celebrate the Olympic Spirit of competition among Californians.

Before the race started a symbolic State Games Torch was passed around the track. The grandson, grandpa duo of Kayden "Speedy" Gonzales and Curtis "Mohawk Grandpa" Nelson, had a good race day.

Gonzales competing in the 12-year-old intermediate class division, was hoping for a repeat of a gold medal from last year. He raced three motos, finishing a close second each time with his competitors from the local track. Kayden was still proud to bring home a silver medal for Team Liberty.

Nelson racing in only his second race was looking to improve his skills at the gate. Competing in a mixed cruiser group of 16 to 59-year-olds, Nelson did not qualify for the medal round.

"I was happy with being out here racing with my boy," said Nelson. He added that he is now being coached by Kayden as much as he coaches him. Nelson also noted that locally there are about 15 riders that compete in this family sport from little guys to adults.