Michael Gillum: Combat Engineer in the Vietnam War and his mission of reconciliation 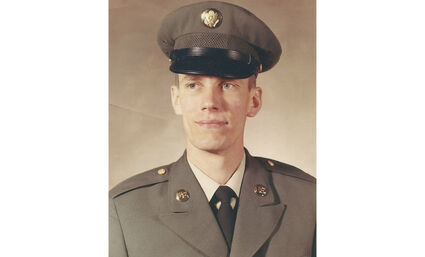 (Note: This is the 20th article in a continuing series about local military veterans and their service to our great country.)

Michael Gillum was born in Indianapolis, Indiana, on March 1, 1946. He belonged to a family of giants: his father was 6' 3" and his younger brother 6' 8" in height, while Michael himself grew to be 6' 6" tall (his older brother only made it to 6'). His father served in the Army Air Corps as an aircraft mechanic in WWII in the Italian theater of war; while Michael's mother was a stay-at-home mom. Following the war, his father worked various odd jobs, finally landing a job as a civilian mechanic at Kirtland Air Force Base, outside Albuquerque, New Mexico.

When Michael was just five years old, his father rejoined the military (U.S. Air Force) and, in 1952, was assigned to Ramstein Air Base, West Germany (the ocean liner the family took to Germany followed in the wake of the RMS Queen Mary). Michael attended first through fourth grades in Germany. In the late 1950s, his father and family moved on to Carswell AFB, Texas. It was in Texas that Michael first experienced segregation and Jim Crow. "I saw white kids being taken off in their buses to white schools, and black kids to the black schools, all off the base. But on the base we were all the same; we were neighbors. It seemed kind of crazy to me. All through my early years my best friends were mostly Black, Hispanic or Asian."

After some two years at Ramstein AB, the family was back in the States – his father now assigned to Edwards AFB. Michael attended Desert High at Edwards from 1960 to 1964 and had a very active school life. He played basketball, volleyball, ran track, and was a member of the Latin and Math clubs. He also played in the school band, touring all over Kern County and performing at halftimes of high school football games. He and the band also performed at the annual summer parades in Boron, where, on one occasion, Ronald Reagan was the parade's grand marshal.

Following high school, Michael attended Valparaiso University, Indiana, receiving his B.S. in Civil Engineering in 1968. As he recalled, "Valparaiso was a Christian university and my faith in Christ grew so strong that I had total trust in God to look out for me."

With his degree in hand, Michael took a job in Los Angeles with the State of California, Division of Highways, as a highway engineer. However, he now faced a dilemma. He no longer enjoyed the student deferment he had in college, making him eligible for the draft at the height of the Vietnam War. What should he do? Instead of waiting to be drafted, Michael enlisted in the Army in July 1968, with the understanding that by doing so he would have more control over his time in the service. His decision paid off, for the Army offered him a six-month deferment to continue working for the State of California.

In January 1969, Michael was formally inducted into the U.S. Army. Both his basic training and advanced infantry training (AIT) took place at Fort Leonard Wood, Missouri (or, as the recruits called it, "Fort Lost in the Woods, Misery!"). After AIT, he completed a non-commissioned officer (NCO) training course for combat engineers that had only recently been established at the base. "I attended the second class [of this new training course]. About 90 percent of those in the class were college graduates. We had a lot of 'brainiacs' in that class."

Michael was able to spend Christmas '69 with his family. Then, in January 1970, the newly minted E-5 (Sergeant) was finally off to Vietnam. He was assigned to the 18th Engineering Brigade in Pleiku, a vital U.S. supply base in the central highlands of Vietnam not far from the Cambodian border. As a construction foreman, Sergeant Gillum oversaw construction of a major section of National Highway 14, a strategic highway that traversed central South Vietnam, connecting key towns and cities along the way (including Pleiku). Simply put, his mission was to transform a dirt road into a paved highway along a stretch of some 50 miles, while clearing out foliage and trees on either side of the new highway and building bridges across intersecting streams and rivers. "It was quite frightening, because there were woods on both sides of the road, and we could be ambushed at any time." As secondary activities, Michael and his fellow combat engineers built fire bases close to the Cambodian frontier and cleared mines off of dirt roads for vehicle convoys.

Michael would often inspect the work being done on the highway from the vantage point of a helicopter, which also gave him the opportunity to see first hand the degradation of the environment caused by the war. "It was very disheartening to see the results of using the [chemical defoliant] Agent Orange. And also to see the bomb craters; it was unbelievable, they were everywhere. It was quite disturbing."

Interestingly, he noted that the inhabitants of the central and northern highlands of South Vietnam included more than 50 ethnic tribes, with customs and languages that differed from the Vietnamese people in general. As Michael explained, these tribes were quite primitive and were often treated as second-class citizens. "The Viet Cong would come into their villages and say, 'you will fight for us or we will kill your families.' Then South Vietnamese soldiers would go into their villages and do the same. In some cases, these poor people would fight during the day for the South, and at night for the Viet Cong."

Michael experienced many traumatic events during his time in South Vietnam, but none more traumatic than what took place on May 12, 1970: "Major-General [John A.B.] Dillard was in charge of all the engineering work in Vietnam. He came for a visit to inspect our projects. He was accompanied by high-ranking officers and NCOs from brigade group and battalion HQ. Also with the general was the helicopter pilot, co-pilot, and two 19-year-old door gunners. I had lunch with the door gunners before the inspection. However, I was unable to go with them due to the lack of room in the [UH-1 Huey] helicopter. So I stayed behind and monitored their radio communications. About 30 minutes after the two helos had left a 'Mayday' distress call came in from the combat escort helo. He said that the Huey with the general and the two young door gunners had been shot down; ten out of eleven men died. One of the door gunners [upon completion of his year of service in Vietnam] had been scheduled to return to the U.S. the next day."

Michael returned to the States from his eleven-month tour of duty in early December 1970, flying into Travis AFB. When he exited the transport aircraft the sergeant in charge quipped, "if you have any problems just learn to deal with them." Sergeant Gillum was officially mustered out of the Army on December 12, 1970.

He went back to work for the State of California. In 1971 he got married. He had met Carolyn, his future bride, at a Christmas party before going off to Vietnam, and during his time there they had stayed in touch through letters back and forth. Their marriage would bring forth three children – a boy (who grew to be 6'11" tall and made a career in the Army) and two (much shorter) girls. In 1995, following a divorce, Michael married Virginia.

Laid off by the State of California in the mid-1970s, Michael found a position with the city of Richland's water and sewer department in eastern Washington state. He worked there for 25 years, retiring in 2001. The following year, after the death of his father, Michael and Virginia moved to the Antelope Valley to help care for his widowed mother.

Despite his successful career and his success as a devoted family man, Michael struggled – for years that soon stretched into decades – to come to terms with his service in Vietnam. "Since returning from Vietnam, there were aspects of my life I didn't fully understand. There were times when I thought about suicide," he said. He went 42 years without seeking help, without saying anything to his parents, his siblings, to anyone. No doubt like so many other Vietnam veterans battling PTSD, he simply "buried [himself] in his job."

Finally, in 2013, he began seeing a psychiatrist at the VA hospital in Sepulveda, telling his story, "getting it out," instead of futilely seeking to avoid the pain and anger, which made a palpable difference for Michael, and he began his road to recovery. Late in 2013, he took another major step along that road – making the first of his five visits to Vietnam over the past eight years, a personal journey of reconciliation with the Vietnamese people and, more significantly, a mission of love and mercy to help victims of the war with physical and/or neurological damage resulting from Agent Orange (e.g., blindness, deafness, physical deformities). In doing so, he followed in the footsteps of a unique cohort of fellow Vietnam veterans who – despite scant awareness among the U.S. public – have labored in-country for decades, seeking resolution and healing by helping to heal those Vietnamese still suffering from the terrible legacy of the 20-year conflict.

On his initial visit to Vietnam, Michael was surprised to be met with so much understanding, forgiveness and optimism by the Vietnamese people. He shook the hands of five North Vietnamese soldiers. "They were all smiles, one of them said to me, 'peace is good.'" He also encountered two English women who had been activists against the Vietnam War. The women, who interviewed Michael, were working on a documentary about the amazing work being accomplished by former G.I.s in Vietnam. The documentary, titled "You're the Enemy. Welcome Back," was released soon thereafter, and has been shown all over the world.

(Note: For more information on the amazing activities of these brave G.I.s in Vietnam, do an internet search for Vietnam Friendship Village or Project Renew Vietnam.)