Exotic cats of the world live in Kern County 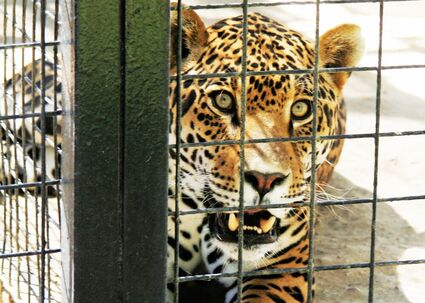 The Feline Conservation is home to both smaller cats and also larger ones like tigers, leopards and jaguars.

Did you know there are about 20 different species of wild cats that can be found in Kern County? Only two of them, mountain lions and bobcats, are native to this area, but you can see these two as well as snow leopards, fishing cats, jaguars, servals, caracals, ocelots, Canada lynx, margays, jaguarundis and more in a shady oasis only 30 miles from Tehachapi at Rosamond's Feline Conservation Center.

Kern County holds many surprises, and one of them is this remarkable sanctuary, formerly known as the Exotic Feline Breeding Compound, which is home to one of the biggest collections of large and small cat species in North America. It was founded in 1977 by Joe Maynard, and the Feline Conservation Center is a recognized 501(c)(3) nonprofit that operates the facility. It has continued to improve and flourish in the nearly 40 years since it opened to the public in 1983, and if you haven't been there lately, you should pay a visit and see what a beautiful place it has become.

Of course the facility was closed during the height of the pandemic, and has still been forced to cancel their annual fundraising events, but it has reopened to the public except for Wednesdays and Sundays. The absence of visitors has had a very detrimental effect on this nonprofit's income stream, so by visiting and donating you can help them feed the 70 cats that live there.

As you enter the wildlife center, you will be taken aback by the number and variety of exotic cats that live there. Some of the rarest and most beautiful animals live in their own sanctuary where they tend to be relaxed and comfortable in their desert home.

The Feline Conservation Center is not a wild cat rescue or rehab facility. While some of the animals did come from the wild and need a home, the FCC actively participates in cooperative breeding projects with other zoos and endangered animal facilities in other parts of the world, and cubs and kittens born there are often sent to other zoos for their conservation programs.

The staff has gone to great lengths to provide natural settings that replicate the cats' natural environments. For example, the fishing cats have a running stream of water to drink, soak, and play in. Depending on the specific cat's habitat, they include cliff-like rocks, trees, plants and a seemingly natural water sources to attempt to duplicate what would be in these animals' natural surroundings.

As the former name – Exotic Feline Breeding Compound – of this nonprofit organization suggested, one of the main goals is to increase the number of these increasingly endangered cats. Like humans, they tend to be particular about their choice of a mate. "Breeding is not always an easy task," Camille Gadwood, a longtime director of public relations for the EFCB explained several years ago, "Cats are reluctant or unlikely to breed when they are uncomfortable, they have a unique point of view which is secretive and shy. We try hard to keep them from being stressed out, since stress lowers their breeding success."

These stunning felines have a proper diet and health regimen to follow. Their routine is a pretty steady one, with the animals being fed either chicken or horse meat once a day five times a week and during the remaining two days of the week, the cats fast and do not eat to mimic their natural eating habits. There are many enrichment activities, and play and food items are given to the cats to stimulate them and keep them from getting bored.

You can view the beauty of their eyes up close and personal, because unlike many large zoos, you are only a few feet away from these cats at the Feline Conservation Center. You can sometimes hear the calls of cats, like the highly endangered Amur Leopards courting each other and see the exceptional coats of these animals. It is an amazing experience to be so close to these magnificent mammals. 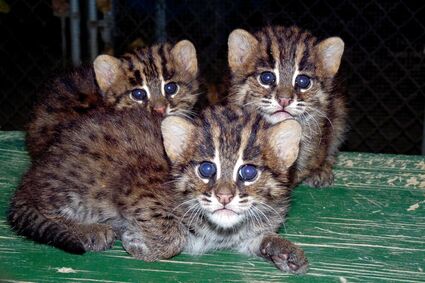 Fishing Cat kittens that were born at the Feline Conservation Center. Photo courtesy of FCC.

The FCC also has a very large and well-stocked gift shop, where you can buy clothing, toys, books and many other kinds of exotic cat-related merchandise. If you are planning to visit the Feline Conservation Center, take either Highway 14 or Tehachapi-Willow Springs Road to Rosamond Boulevard, which is the only Rosamond exit off the freeway. Go west from the freeway (east from Tehachapi-Willow Springs Road) on Rosamond Boulevard to Mojave-Tropico Road; there is a stop sign, and a large colorful FCC sign on the corner. Turn north, go about one mile to Rhyolite, and turn left. FCC's driveway begins where Rhyolite ends. There is an admission charge of $10 general, $8 seniors 60+, $5 for ages 3-12, children under 3 enter free. Don't trust the standard directions that your car or phone's navigational system may give you – FCC staff reports that people sometimes get lost following GPS coordinates.

As the weather begins to cool down in the weeks and months ahead, treat yourself and family or friends to a visit to the Feline Conservation Center. It has always been interesting and it just keeps getting better.