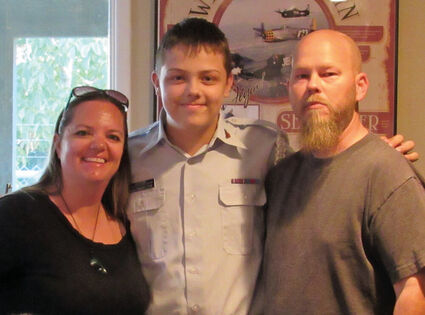 Tehachapi Composite Squadron 46, Civil Air Patrol, had the privilege to promote two of our cadets this week and to present awards to several members for their hard work on the behalf of our squadron. Cadet Airman J. Kaczmarczyk promoted to Cadet Airman 1st Class earning the General Hap Arnold Achievement Award.

Senior member 2nd Lt. Linda Baumgartner passed a rigorous 100 question Aerospace Education Exam earning the coveted General Chuck Yeager Award. This is an important achievement for a senior member in their CAP journey. This achievement is required for promotion to Captain and for any member who wants to become a Squadron Commander in the future. Congratulations for completing this part of your CAP journey with us.

Tehachapi Composite Squadron 46 would like to thank the following individuals and businesses for their generous contributions of time, food and monetary donations for our recent Grand Re-opening Gala which was held on 17 July 2021. Col. Ross Veta, CAP; Senior Members Gilbert and Elizabeth Espinoza; Mr. and Mrs.Megrdle; FloraDonna's Cakery; and Pelon's Tacos. We would like to express our gratitude and ask all of Tehachapi to join us in thanking these individuals and businesses for their help in making our reopening Gala a success. Squadron 46 is proud to serve and be a part of this great community. We look forward to continuing this relationship for years to come. 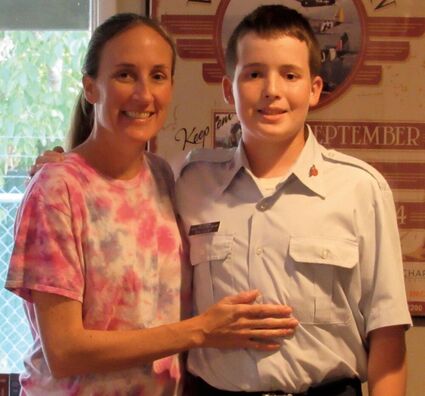 Civil Air Patrol is the longtime auxiliary of the U.S. Air Force and as such is a valued member of its Total Force. In its auxiliary role, CAP operates a fleet of 560 single-engine aircraft and more than 2,000 small Unmanned Aircraft Systems (sUAS). It performs about 90% of continental U.S. inland search and rescue missions as tasked by the Air Force Rescue Coordination Center and is credited by the AFRCC with saving an average of 82 lives annually. CAP's 54,000 members also perform homeland security, disaster relief and drug interdiction missions at the request of federal, state and local agencies. Operating as a nonprofit organization, CAP also plays a leading role in STEM/aerospace education, and its members serve as mentors to more than 20,000 young people participating in CAP's Cadet Programs.