In Tehachapi, we are all warriors 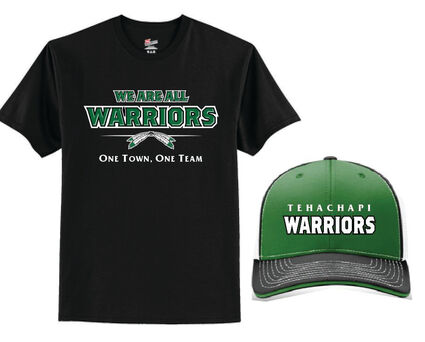 The long-awaited 2021-22 athletic season is quickly arriving at Tehachapi High School and the Warrior Booster Club is accepting memberships for this upcoming season.

A membership isn’t limited to just parents of players, it’s a community-wide effort to help support every team at Tehachapi High School with a small membership contribution. Along with that comes some exclusive merchandise, chance at priority seating at football games and the peace of mind that your money is going to help produce the next generation of leaders via the lessons learned on the fields, courts and pools of competition.

Coming off the last 18 months or so, it wasn’t lost upon the board at your local Booster Club that we needed something different this season, something that united the Tehachapi area after a year full of headlines and actions that are aiming to tear us apart. There was also the realization that plenty of new residents have moved into our community and might not feel connected to the Tehachapi Warriors because they haven’t been here long enough, or their kids have yet received the opportunity to suit up with “Tehachapi” across their chests.

I reached back into my sports marketing background and came up with an old adage, I then got on the phone to some of the greatest graphic designers I have ever known and we talked about the direction and what we were trying to accomplish. As a result of our idea and the graphic brilliance of Phoenix Design Works, the “We Are All Warriors” campaign came to life.

After a year and a half of hopelessness, fatigue, divisions across the nation, political unrest and a host of other distractions, “We Are All Warriors” is set as a reminder. A reminder that we all fought together to survive the last 18 months of turmoil, we all had to take on the Warrior mindset to come through the negativity stronger than before. It also speaks volumes that no matter who you voted for, plan to vote for, agree or disagree about, when you are in Tehachapi, you are part of our team, our tribe, our Warriors. No matter what happens in the outside world, in this town “We Are All Warriors.”

This campaign reaches out to new residents, as well, it’s a reminder that you are one of us now. You chose to live in Tehachapi for a variety of reasons and no doubt one of them was the sense of community found in very few places. You, too, are now Warriors, “All” is the emphasis word in that phrase, no matter what path led you here, we now wear the same colors.

To drive that point home and to get that message out to the community those logos were placed on T-shirts and sweatshirts available this year to Boosters’ members. To add one final piece of the puzzle, M&M Sports wisely added the caption “One Town, One Team” to remind everyone that unlike many of the larger schools we compete against, our support is not based on a line drawn on a map, but by the geographic uniqueness of Tehachapi. There is one set of Friday night lights in this town illuminating the autumn skies and they shine only on the Tehachapi Warriors.

So, I would encourage you to join the Warrior Booster Club at http://www.thsboosters.com and proudly wear that merchandise as a reminder that we are stronger together. We set aside silly differences and rally behind one thing, the teams that represent us in competition around Kern County do so under the proud Tehachapi Warriors moniker. We stand with them, we stand together, we stand united because in Tehachapi, “We Are All Warriors.”