A freight train on the Tehachapi line in the 1880s.

The railroad through the Tehachapi Mountains, completed in 1876, is a vital thoroughfare for freight traffic. In fact, the Tehachapi line is considered to be the busiest section of single track mountain railroad in the world.

While all the traffic is freight now, for the first nearly 100 years of the railroad's existence, there were daily passenger trains that passed through Tehachapi. It was one of these passenger trains that suffered the worst transportation disaster in Tehachapi history on a cold winter's night on January 20, 1883.

At about 2 a.m., Train #19, called the Atlantic Express, pulled up next to the depot, having just climbed the grade from Bakersfield. The train consisted of seven cars – two sleeping cars, four coaches and smoking car – and two locomotives, the main engine and a helper engine that had been added in Caliente between the road engine and the passenger cars. The forward brakeman began side-tracking the main engine and removing the helper engine while the conductor went into the depot to confer with the telegrapher. The rear brakeman then left the train as well, by some accounts to accompany a pretty young woman into the depot to see if he could help find accommodations for her, neglecting to set the hand brakes. The train was left unattended, and the air brakes began to leak off.

Aboard the train, and asleep in one of two sleeping cars, were former California Governor John Downey and his wife, Maria Guirado Downey, whom he had married 30 years earlier in 1852. Mrs. Downey reportedly was afraid of the speed of trains and was opposed to travelling on them, but her husband insisted that they take a train rather than horse-drawn coaches.

Also aboard was Charles H. Larrabee, 63, a former congressman from Wisconsin and a Union army officer from the Civil War.

Although the tracks may look completely level in the Tehachapi Valley, the grade still slopes downward towards Bakersfield, and with a strong east wind blowing that January night, the seven passenger cars began to roll slowly back down the hill, picking up speed. By the time the trainmen noticed the absence of the cars, it was too late to catch them and they rolled backwards into the darkness. The cars began to roll at faster speeds than the tracks were ever designed to accommodate (even today, the speed limit down the grade is just 25 miles per hour). The Kern Weekly Record at the time reported that, "To say seventy miles an hour was to put it at its lowest estimate." The violent shaking of the cars at that speed upset the stoves in both sleeping cars and they overturned, setting the cars ablaze while they still hurtled down the tracks.

Eventually, three head-end cars and both sleepers became separated from the remaining coach and smoker and these five cars derailed about 3 and 1/2 miles down the grade, plunging 75 feet down into the ravine of Tehachapi Creek. The flames of the burning cars could be seen all the way from Tehachapi. Amazingly, there were survivors who were able to escape or be pulled from the wreckage. The remaining two cars somehow managed to stay on the tracks and a retired railroad man aboard one of them was able to apply the brakes and stop the cars near Tunnel 11.

Not everyone was lucky enough to survive the spectacular crash: some reports say 15 people died, while other accounts say between 17 and 20 people were killed that night, including two porters, an express agent, Charles Larrabee, and the unfortunate Mrs. Downey, whose worst fears about trains had come true. Governor Downey had been pulled to safety by two other men, but his wife was pinned in the wreckage. The resulting fires were so intense that several bodies were never recovered, including that of Mrs. Downey. Congressman Larrabee was apparently able to be extracted from the wreckage and was taken to Los Angeles, where he died of his injuries later the same day.

The Southern Pacific Railroad was not accustomed to the concept of accountability, and immediately blamed the crash on transients or would-be train robbers, despite the fact that it occurred in the wee hours of an icy morning and the train was carrying no gold shipments or other valuable cargo. The public was outraged by SP's transparent attempt to shirk responsibility, and demanded that the train crew be arrested for criminal negligence. While this did occur, SP bailed out their employees a few days later, and no one was ever successfully prosecuted for the loss of the Atlantic Express.

Old lies die hard: the current Wikipedia entry on the Tehachapi Train Crash of 1883 still repeats the discredited tale. The entry states, "Investigation into the incident revealed that two strangers had boarded the train. It is believed that these two men were robbers that had lost control of the train and would die in the disaster." It is bizarre to me that this claim is still being made, nearly 140 years later, without a shred of evidence.

Governor Downey was reported to have never fully rebounded from the tragic accident, no doubt suffering what would now be diagnosed as post-traumatic stress disorder. His life began a downward spiral that included alcohol abuse, and though he remarried in 1888, his second wife died in 1892, and Downey himself died in Los Angeles in 1894. An elaborate dress owned by Mrs. Downey was donated by her family to the Tehachapi Museum, and it is on display as tribute to her and as a memorial to the train crash that took her life.

The figure I've heard most often states that an average of 45 trains a day currently pass through Tehachapi. Unfortunately, none of them are passenger trains, though I know from having ridden the train down to Bakersfield that it is an incredible picturesque route that passengers would love to still be able to experience.

For the foreseeable future, that's just an impractical dream. But passenger train travel through the Tehachapi Mountains has not been forgotten by longtime residents who once rode the trains. Or by the ghosts of those who perished on a bleak and bitter January night in 1883. 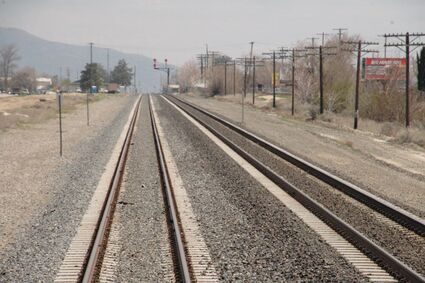 On a winter's night in 1883, a passenger train began to roll backwards down these tracks away from the depot and back down the hill it had just climbed.

Be careful during our unseasonal heat wave, and take comfort in the fact that it is rare – Tehachapi historically has experienced an average of about three weeks a year of temperatures that have climbed into the 90s. In the past we have gone for years at a time without an official temperature reading of 100 degrees or more, though that seems to be inescapable now.