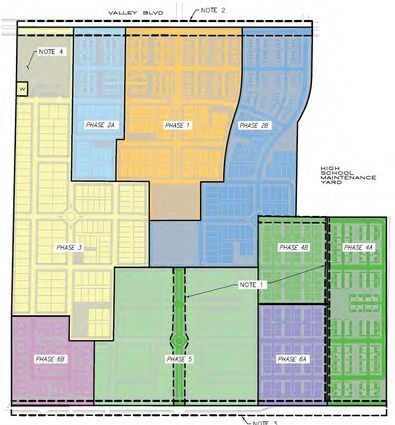 On July 12, in a nearly three hour meeting, the Tehachapi Planning Commission heard a presentation of the final master plan for the proposed Sage Ranch development from Development Services Director Jay Schlosser, who tried to keep it as short and complete as possible. The Sage Ranch project consists of 995 single family and multi-family residential units to be constructed on 138 acres on Valley Blvd. near Tehachapi High School. Schlosser said that the project is to be completed in nine phases over a seven-year period with 143 units to be completed a year. Most amenities are to be completed with the first phase.

Addressed in the EIR were impacts to air quality, biology and water supply. Schlosser said that as a result of the studies, it was determined that Sage Ranch would need to purchase an additional 93 acre feet annually from the Tehachapi Cummings County Water District. A proposal had been sent to TCCWD; however General Manager Tom Neisler said they had not had enough time to review the request. He did agree that it could probably be done in time for the August 2 City Council meeting when the project is scheduled to come up for approval.

The preliminary plan for the development was originally approved in February of 2019, pending the completion of the Environmental Impact Report (EIR). Since that time the Planning Commission approved four six-month extensions of the time to complete the complicated EIR.

CEO Paul Morris and other members of his team were on hand to answer questions should they arise.

Schlosser said his department had spent a lot of time on the future of Valley Blvd., which will be widened to four lanes with a median. Pinon will also be extended to run from Curry St. to Dennison Rd. He added that each of the phases must be able to stand on its own and the amenities must be supported by the HOA. The builder will be required to post a bond as solvency of the homeowners association is governed by the state.

The Tehachapi Planning Commission meets on the second Monday of each month at 6 p.m. They are currently meeting at The BeeKay Theater, 110 S. Green St.