Yellow starthistle is about to bloom 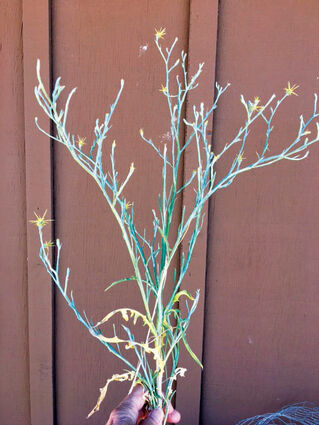 Yellow starthistle, Centaurea solstitialis, is an invasive weed and it needs to be dealt with now before it spreads any further.

The photo in this article is of a stand of "bolted" yellow starthistle (YST). YST is bolted when, from the rosette (like a mustard rosette) which lies close to the ground, stems are sent upward.  Beyond the ribboned plant you can see dozens of other bolted plants. It has a blue-green color, which a trained eye can distinguish from mustard or other weeds from quite a distance.

At the end of some of the stems in the close-up photo, the characteristic "star" of needles has already developed and above those vicious needles the yellow flower will soon grow.  The flower will actually be composed of thousands of seeds which can eventually grow into a new plant.  YST should be dealt with no later than this bolted stage, before the flower appears.  For after the YST develops more than a few flowers it will no longer accept herbicide spray.  If the plant is removed by cutting it off (I prefer using a long-handled shovel) at ground level, once it is flowered then that cut plant must be carefully disposed of in the trash.

Look for yellow starthistle without delay.  Spraying with Milestone Herbicide works well at this stage.  Milestone is concentrated; it only takes 1 teaspoon in a gallon of water in your gallon hand sprayer or 5 teaspoons in your 5-gallon backpack sprayer.  Milestone is available by the quart to homeowners online, or Abate-A-Weed in Bakersfield for somewhat more money.  It is so concentrated that this quart will probably be your first and last.  Of course, cutting YST off at the ground now means no cost and no herbicide needs to be introduced and, without being in flower, you may leave the plant on the ground.  If it is in flower, be sure to gather it and dispose of it without dropping the flower head/seed.

If you don't get to this job until the YST is in flower, and you are not able to cut the YST off with a shovel or hoe, mark the areas of growth with any kind of bright-colored ribbon.  Then, next winter, maybe right after the holidays, get that Milestone out, mix only 1/2 teaspoon per gallon and spray the entire area where the YST is now growing.  The rains then, hopefully, will carry the herbicide into the ground, into the seed bed, which will keep the yellow starthistle from germinating, which means none will grow next year.  If you do this annually in early winter, you will be ridding your property of this terrible pest.