The unconventional journey of Mickey Jannis 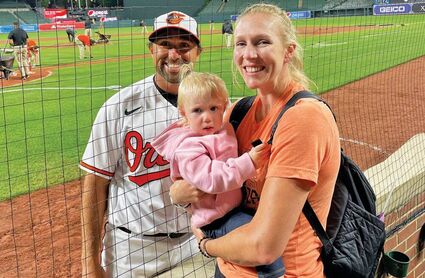 Jannis with his wife emily and his daughter at Camden Yard.

On June 23, the second player that I once talked about as a college pitcher on the local radio airwaves made his Major League Baseball debut, and if there was ever an unconventional path to the big leagues, knuckleballer Mickey Jannis took it.

Jannis was on the first Cal State Bakersfield baseball team in 2009 and in 2010 he was drafted by the Tampa Bay Rays as a pitcher following a decent college career in an upstart program. He toiled around in the minors for a few years, being released by the Rays after only reaching Low-A level ball. It was at that point that the real journey of Mickey Jannis began. Realizing he didn't have the stuff to be a conventional pitcher, he dusted off the knuckleball that he learned as a kid and went to work reinventing himself. That work for the next four seasons included a wild ride in a pair of Independent Leagues in the United States and a season in the Australian winter league with the Brisbane Bandits.

That work paid off and soon enough affiliated baseball was calling him again and he joined the New York Mets organization in 2015. It was there that Jannis' knuckleball started getting noticed, especially in the Arizona Fall League where social media started giving him credit for the wild-dancing pitch that drove hitters mad. He would spend the next four years in the Mets organization, reaching the Triple-A level on many occasions, his dream of being a big-league pitcher within sight, but just out of reach.

He would end up with the Baltimore Orioles at the start of 2020 and reported to Spring Training in February before COVID-19 shut it down. He wouldn't pitch in a competitive game in 2020, instead relying on private workouts, the net in his backyard in Mesa, Arizona, and some pickup opportunities at local parks to keep his skills sharp.

This year has been a much better journey as he was sent straight to Triple-A Norfolk where he was masterful for the Tides and on June 23 he got the call every ballplayer who puts on a uniform wants to receive, he was joining the Orioles in Baltimore. At 33 years of age, he certainly isn't considered to be in his prime, but the knuckleball, as he once explained to me in a television interview, helps keep the impact of the game off of his arm. The whole goal is to push the ball to the plate with your fingertips, not throw it as hard as one can.

Eleven years since he was drafted and more teams than even he could count, Mickey Jannis was a big leaguer. From the college diamond at Cal State Bakersfield to the down under of Brisbane, Jannis' journey had finally come full circle. He was one of those guys who refused to give up and, continually following his career, I knew eventually his time would come.

While his story is something that companies such as Disney like to make movies about, there was no theatrical climax to his story. Yes, he got into the game on June 23 at Camden Yard in Baltimore, he was pegged to do some cleanup duty against the Houston Astros who were already well in control of that ballgame. The knuckleball is funny, one night it is unhittable, the next night you might as well set it on a hitting tee for people to smash. After recording his first big league strikeout and pitching a decent first inning, Jannis was tagged for seven runs on eight hits, three of which were homeruns while walking four. He was even stopped by an umpire to check for sticky substances which increase spin rate, ironically enough that is the last thing a knuckleball pitcher wants is spin, but such is the sense of MLB these days and the umpires who enforce these silly measures.

Five days later Mickey Jannis was back in the minors and back in Norfolk. Who is to say if that was his one and only shot at the big leagues, but even if it was, the 33-year-old fulfilled his dream, he weathered the challenges and the long road, suited up and played in a Major League Baseball game. If Disney does ever make a movie about him maybe they can reuse the Cinderella title, because even when the clock struck midnight the former Cal State Bakersfield pitcher shined in his own unique way.

For the rest of us that have been pulling for him, it is about the best ending we could imagine.