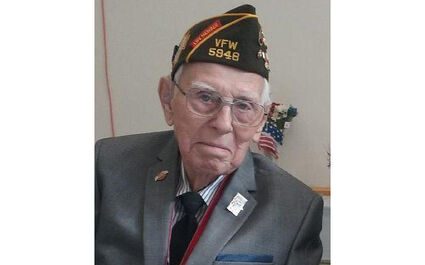 (Note: This is the 18th article in a continuing series about local military veterans and their service to our great country. Yet, it is the first article showcasing a local veteran who landed on Omaha Beach in Normandy, France on D-Day.)

John Grenek grew up in Minneapolis, Minnesota. In January 1940, having just finished high school, he enlisted in the Minnesota National Guard. In 1941, the National Guard was federalized and his unit dispatched to Camp Claiborne, Louisiana. Following basic training, he was transferred to Fort Dix, New Jersey, from where he shipped out to England in January 1942. As part of the first contingent of American soldiers to arrive in the United Kingdom, Grenek was initially assigned to a British Army regiment.

After sustaining a broken ankle in a training exercise, he spent a few months recuperating at a hospital in Dublin, Ireland. Once healthy again, he was assigned to the 29th Infantry Division (29 ID) and on June 6, 1944 – that iconic day more than 77 years ago still emblazoned in the hearts and minds of Americans as D-Day – he landed with the third or fourth wave on Omaha Beach. Yet, D-Day was also the "Longest Day" for the G.I.s who struggled valiantly ashore at Omaha, sustaining sheets of fire from German machine gun nests, mortars and heavy weapons concealed with Teutonic precision on the bluffs above the beach. By day's end, some 3,000 American soldiers lay dead or wounded in the blood-soaked sand.

In the weeks and months following that gruesome prelude to the liberation of western Europe from Nazi tyranny, Grenek and his fellow "29ers" took part in the push through France and into Germany, seeing almost continuous combat until V-E (Victory Europe) Day on May 8, 1945. The website of the 29th Division Association offers graphic insight into experiences of the division, and so it is quoted below at some length:

"The 29th entered Germany on October 1, 1944.... For more than a month, the division engaged in frustrating positional warfare as the weather deteriorated sharply and an ammunition shortage worsened to a critical level. Fully recovered from the debacle in Normandy, the Germans gave little ground and inflicted heavy casualties each time the 29ers launched an attack. On November 16, 1944, the 29th Division joined in one of the largest U.S. Army offensives of the war to date as a component of the Ninth Army. The goal was to smash through the German lines in the Rhineland, cross the Roer River and drive on to the Rhine by Christmas 1944. In three weeks of brutal combat, however, [29 ID] only managed to advance nine miles. The minuscule German towns through which the 29th fought would be remembered by the 29ers as some of the most brutal fighting they experienced in World War II. Further, as cold and wet weather set in, the 29th Division lost hundreds of men due to exposure and trench foot." From http://www.29thdivisionassociation.com.

Eventually fighting its way deeper into Germany, the Division crossed the historic Rhine River on March 31, 1945. For the next five weeks, it mopped up scattered pockets of enemy resistance and on May 2, 1945 elements of the 29 ID encountered the Soviet 6th Guards Cavalry Division on the Elbe River. The Americans and Red Army men greeted one another enthusiastically, exchanging hats, weapons and other items of military memorabilia. Six days later, the war was over.

All told, more than 20,000 men of the 29th Infantry Division fell in battle, with many tens of thousands more wounded. In fact, of the 60-plus U.S. Army divisions that took part in the European campaign, only one other division had more losses. For his sterling military service, Grenek was awarded five Bronze Stars (source: Aerotech News, Nov. 3, 2017, updated March 22, 2021). He was honorably discharged from the Army in April 1945.

Yet just a month prior to his discharge, Grenek had gotten "hitched!" Here's the story, which, no doubt, was repeated many times over throughout the war: one day while in England, before deploying to France, at the American Red Cross in Birmingham, a fetching English girl named Jane caught his eye. Grenek married her on March 6, 1945, and brought her back to the States.

After the war, and before moving to Tehachapi, Grenek was a real estate broker in Orange County. On June 6, 1994, the 50th anniversary of the D-Day invasion, he and Jane were able to tour the battlefields of Normandy, where the French government awarded him the 50th Anniversary "Legion of Honor" Medal. (Note: I was also in Normandy on June 6, 1994, as a tour guide for veterans of the 5th Infantry Division, which had landed in France in early July 1944. I will never forget sitting in the bleachers set up on Omaha Beach across from President Bill Clinton, the Queen of England and most of the leaders of the Free World, 50 years from that very day that the fate of Hitler's "1000-year Reich" had been forever sealed.)

In addition to visiting Normandy, Grenek had the privilege as a World War II veteran of being on the first Honor Flight conducted by Honor Flight Kern County, "a nonprofit organization that flies hundreds of aging vets to Washington, D.C. – all expenses paid – where they participate in a whirlwind tour of the great war memorials in our nation's capital." (Bakersfield Californian, June 6, 2016, updated September 13, 2016) 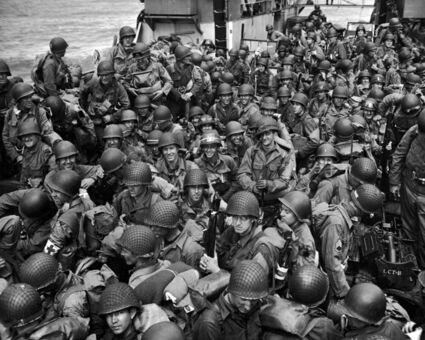 Grenek never forgot the brave young men who served at his side during the struggle for freedom against Hitler's Germany, but who never made it home. In an interview with a local television reporter on Memorial Day 2016, he said, "I had so many of my friends and buddies who fell alongside me. And I'm here to honor them."

John G. Grenek passed away on November 26, 2019, at his home in Tehachapi. He was 98 years old. With his wife of more than 70 years and son, John Grenek, Jr., at his side, he was laid to eternal rest with Honors at the Bakersfield National Cemetery.