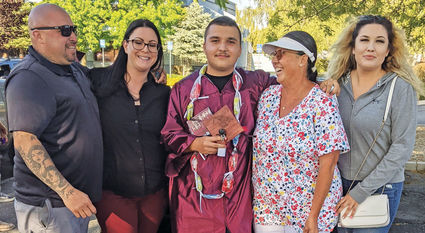 Mojave River Academy (MRA) is a free public K-12 independent study charter school organized through Oro Grande School District. The Academy has 12 different campuses located in San Bernardino, Riverside and Kern counties. The goal of the Academy is to promote the academic success of every individual student and to provide a safe, nurturing, intellectually rigorous and relevant educational experience. Tehachapi's local Mojave River Academy campus is located at 20948 Sage Lane.

As the independent study modality is already in place at the Mojave River Academies, the students did not suffer from some of the same issues as did many other students in the traditional public school system. Students are each assigned a dedicated teacher with whom they meet at least once weekly and they continued to do so with appropriate COVID restrictions during the course of the pandemic.

Since Kern County is still in the COVID-19 Framework's Orange Tier, like the 2020 Senior Recognition ceremonies, this year's graduation ceremonies took place outside with a vehicle parade. One event was held at 1 p.m. and the other at 5 p.m. on June 7. In ordinary years, seniors from all 12 campuses attend commencement exercises in San Bernardino County at the Redlands Bowl in Redlands, California.

The vehicle parade proceeded one by one to the very festively decorated rear of the building where each senior was individually congratulated by the Center Administrator Principal, Dr. Matthew Ross, and the student's teacher. As she did last year, Tiffany Frechette, Math and Independent Study teacher, made beautiful wooden plaques for the graduates upon which they are able to hang their tassels and attach their diplomas. In addition, they each received a digital yearbook video designed by Ms. Frechette. The students provided a current photo, a baby photo and a senior quote.

A very recent arrival from Tehachapi High School, Malik McClendon, enrolled in Mojave River Academy in early 2021. He decided that an independent study program suited his needs better as he had also become employed with Advanced Conservation Systems, Inc., a solar equipment company located in Lancaster. McClendon starts work shortly with another solar equipment company, Sunrun Solar in Palmdale, and has plans to begin studies at Antelope Valley Community College in 2022 to become certified as an electrician. He plans on playing football for AV College at that time.

With in-person learning for the last year and a half halted at most schools and colleges due to COVID-19, many graduating seniors are reluctant to start college or a technical school until they are certain they can attend in person. Many are therefore taking at least a year off to work before committing to career plans and education. 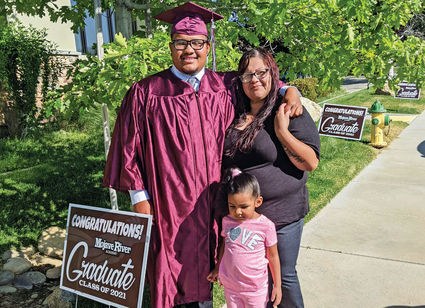 An update on a couple of prior graduates: Christian Steiber entered the Army with a Military Occupation Specialty of 12 Whiskey, Carpentry after graduating in 2020. He is now a certified carpenter and engineer and is in the National Guard Army Reserves.

Jaymes Waters, a 2019 graduate, enlisted in the Army and is currently in the prestigious 101st Airborne Division as a Private Second Class. His specialty is air assault. When he graduated, his goal was to become an Army "badass." He has certainly achieved that. He has an Armed Services Vocational Aptitude Battery (ASVAB) score in the 90s but purposely wanted to start his military career in the Infantry. The GI Bill will provide him with many educational and training benefits.

Both ceremonies were very joyous occasions with relatives honking, music playing, applause and many photo opportunities. Congratulations to all of the Mojave River Academy graduates on jobs well done!