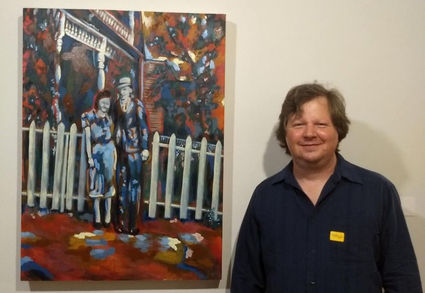 Dennis Gierman is an artist, musician and woodworker. Although born in Ohio, he spent most of his life living in Southern California, growing up in Orange County and moving to the Inland Empire as a young adult.

Gierman runs his own musical instrument business, building custom musical instruments under his own brand name Yukie Ukulele. He builds custom ukuleles, wash tub basses and ukulele cases. He also repairs, restores and sells vintage musical instruments. He uses the custom built ukuleles and vintage guitars as canvases for his artwork. Creating artwork on ukuleles that he builds himself is his way of unifying art, music and woodworking, which are his three major passions.

While attending Norco College, he received the Student of Distinction Award from the Art Department. He was awarded his Bachelor's Degree in Studio Art from the University of California Riverside.

Recently he has finished a series of mixed media portraits of music legends. He is currently working on a series of guardian angels drawn and painted on ukuleles. In all of his work, Gierman pays tribute to the concept of timelessness as he celebrates the moments of time captured in his portraits.

The love of musical instruments comes from the time devoted throughout his life playing guitar, bass guitar and ukulele.

Having been featured in group exhibitions at the Phyllis Gill Gallery, as well as at the Culver Center of The Arts, he will be featured in the Norco College Alumni Art Exhibition this coming fall.