Memorial Day in Tehachapi was full of ceremony, honor and a grand parade. A large crowd gathered to watch the parade travel down F Street to Central Park, where a flag raising ceremony took place accompanied by a 21-gun salute and the fly-over of a Navy biplane. 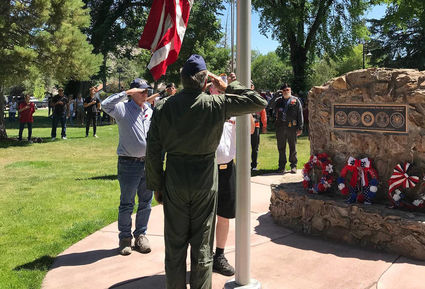 The program in the park began with an opening prayer by American Legion Post 221 Chaplain Eric Purdy. It was followed by an address delivered by combat veteran Dave Reinhart, Dennis Ragsdale read the names of over 150 local veterans who had passed on since the last Memorial Day celebration in 2019. Closing out the ceremony was a stirring performance by the Kern County Pipe Band.

An estimated 700 adults and children were in attendance for the program which was followed by hot dogs served by the American Legion Auxiliary.