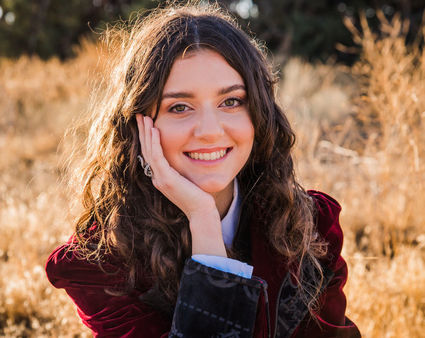 “I like being weird. Weird’s all I got. That and my sweet style.” This quote comes from Maurice Moss, a character in a British TV series called “The IT Crowd.”

Saida Woolf moved to Tehachapi with her family at the age of two and started kindergarten at Valley Oaks Charter School when she was four. She is a video game developer, emerging artist, writer, singer, actress and ukulele enthusiast. She loves cats, comics and other creative pursuits, as well as setting a high bar in academics. Saida has not only challenged herself by taking college classes, she also took on the role of Editor-in-Chief for Yearbook during her senior year.

With a talent for the arts, some of Saida's best memories were playing the lead role in the play Anne of Green Gables and the role of Beth in Little Women with the Tehachapi Community Theatre. She also participated in the Rickroller Robotics Team 4344 and Bakersfield Artist Comic-Con, all while maintaining a 4.0 GPA. With a love of learning new things and creative projects, Saida has won numerous awards, including the 2017 National STEM Video Game Contest Winner, the Scholastic Art and Writing Contest winner, the Science Comic Contest, and the Hugh O'Brian Youth Leadership Academic All Star award. As the Top Student in Biology and Chemistry, Saida has entered the Science Fair and won first place at Kern County level three times. Saida has also studied dance at J&M dance center for 10 years and has performed with an ensemble on stage.

The pandemic this past year has changed things for everyone. Though many of the things that Saida looked forward to for her Junior and Senior years were canceled, Saida used her time during the quarantine to publish her first comic strip "Soulstream" which was released by Scout Comics this year in January. Although she began working on "Soulstream" as a sophomore, Saida remains just as passionate about the "Soulstream" characters and is grateful for the opportunity to share them with her readers.

Valley Oaks Charter School offers a homeschool hybrid model where students attend classes two days a week. Saida credits the freedom and flexibility that Valley Oaks provided for her successful creative projects. "Soulstream," for example, received great reviews, with Comicbooks.com rating it a 5 out of 5 stars. "'Soulstream' feels like what you'd get if you boiled down superhero origins and adventures and were left with the purest parts of both kinds of stories." - Tanner Dedmon at Comicbooks.com

Saida is graduating a year early, which will allow her to have a gap year before starting college at the age of 18. She plans to spend next year working with her publisher to promote "Soulstream" and finally get her driver's license, which was delayed due to the pandemic. Saida will start college in the fall of 2022 to study Humanities, Animation, Video Game Design and Media Studies. Saida hopes to have a career in the entertainment industry and share her stories through various media.