At their May 10 meeting, the Tehachapi Planning Commission considered two projects that would alter existing business locations.

The Commission unanimously approved the J Street Commerce Center project to be constructed at the site of the old Home4Less site located at 430 W. J Street. The property is currently owned by Tehachapi rug-makers Mike and Kathy Hensler. In addition to the old existing 9,000-square-foot warehouse and another 4,000-square-foot building, the Hensler's plan includes five new buildings to be added in four phases. The first building is to be completed within 12 to 18 months and the remaining four within five years. The architecture of the project was described as "Commerce Park" to mimic the existing buildings and will include parking for 67 vehicles and 12 bicycles. The plan for the center also features exterior patios to serve as break areas for employees.

With a three to one vote, the Planning Commission denied the request by Magnetic Hill Enterprises represented by Tehachapi residents Faith and Ken Green to convert the old Ranch House Motel located on Tehachapi Blvd. near Hayes Street into multi-family residential housing. The remodeled 13-unit efficiency apartments would serve as low cost housing for Tehachapi. According to Ken Green, low cost housing in Tehachapi is at a premium and felt the units would rent for about $700 a month. Green also said that, as a landlord, he would be allowed to vet residents prior to occupancy, something he is not allowed to do while the Ranch House is a motel. 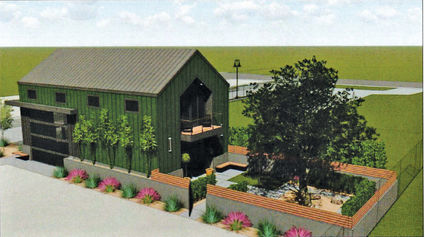 Tehachapi Development Services Director Jay Schlosser stated that the City's position was that the location could not be supported as residential housing due to the noise impacts from the many trains that pass only 130 feet from the property. According to Union Pacific regulations, all trains must blow their horns whenever passing through a gated crossing such as the one at Hayes Street. Schlosser also pointed out the historically bad reputation the property has had in the past with illegal activity and code violations, although he admitted this was with prior owners.

However, in the end the Commission agreed with the City, with the exception of Commissioner Charles White who felt the real need for affordable housing in Tehachapi.

The Tehachapi Planning Commission meets on the second Monday of each month at 6 p.m. They are currently meeting at The BeeKay Theater, 110 S. Green St.