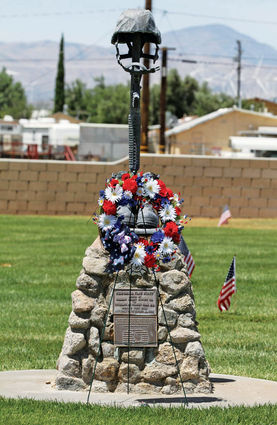 The East Kern Cemetery District and Mojave Transportation Museum Foundation are joining together to honor those who gave their all this Memorial Day at the Mojave Cemetery, 2040 Belshaw St., Mojave on Monday, May 31 at 11 a.m.

District General Manager, Paul Holzer, sees to it that every Veteran's grave has an American Flag placed to thank them for their service. Over 400 veterans are buried in the Mojave Cemetery.

Jason Stverak wrote an article about reviving Decoration Day in 2014 and said, "The soldiers who fell at Gettysburg, Bunker Hill, Iwo Jima, Khe Sanh and Fallujah, didn't know it, but they were fighting for our children's right to grow up in a country where they are free to pursue their dreams. In a way, this makes their sacrifice all the more honorable."

Special recognition will be given to Gold Star Mother, Hilaria Hannon whose son Marine Pfc. Fernando Hannon, 19, was killed in an explosion in Al Anbar Province in Iraq in 2004 while serving as a rifleman with the 1st Marine Division. Fernando was the fifth generation of his family to serve in the U.S. military.

The keynote speaker will be Robert "Stambo" Stambovsky, a Vietnam combat veteran, commissioned from the ranks, who served as an aircraft maintenance and operations officer with Marine Air Group 46, Detachment B, when they were stationed at Edwards AFB.

He joined the Marine Air Reserve in November 1968, Marine attack squadron-142, Naval Air Station Jacksonville, while completing college. Previously, he had three years active as a U.S. Army Medic in Europe and Southeast Asia and was honorably discharged in June 1967.

He proudly served for 39 years in the U.S. military, with his final three years on active duty, Operation Enduring Freedom (2002-2004), and retired in 2004, as Chief Warrant Officer, USMC.

Stambo also has over 30 years experience as an aerospace/flight test engineer with the Department of Defense and NASA at Edwards Air Force Base, California. He retired in 1998.

He has earned both a Bachelor and Masters Degree in Aeronautical Science, through Embry-Riddle Aeronautical University.