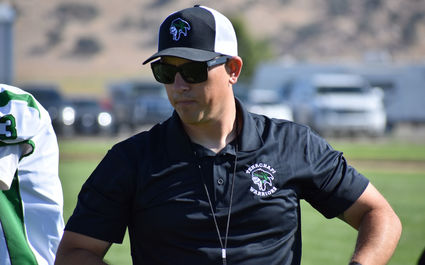 Doug DeGeer,a seen here in 2019 leading an intrasquad scrimmage, vacates the head coaching position after three seasons and a canceled campaign in 2020 due to COVID-19.

Doug DeGeer has resigned as head varsity football coach for the Tehachapi Warriors, putting THS in unfamiliar territory, seeking their second head coach in five years. DeGeer, who coached a total of three seasons for Tehachapi and was unable to play in 2020 due to COVID-19, replaced hall of fame coach Steve Denman who retired following his 35th season in 2016.

DeGeer posted a 10-23 record at the helm of the Warriors; he led the team to the 2017 Southeast Yosemite League championship and reached the CIF Central Section Division II semifinals in 2017 before finishing a pair of lackluster campaigns. The squad was poised with depth and experience in 2020 before the pandemic canceled the season and Tehachapi Unified School District opted not to field the football team this spring.

"I've lived in Tehachapi most of my life and have followed Warrior Football for as long as I can remember. I have enjoyed the opportunity to coach at Tehachapi High School and be part of the Warrior Football program," DeGeer said.

It is never easy to lose a coach, but certainly tougher when that coach exits the position at his alma mater due to circumstances out of his control, whether those be state funding, support from the district, pandemic-response that eliminates a promising season or otherwise, one is left to wonder what could have been, especially when a coach never had enough of a chance to find his own stride and identity.

So, who will be next for Tehachapi High School football? You may or may not be aware of how the coaching contracts work at Tehachapi Unified School District, but the collective bargaining agreement with the teacher's union prioritizes current teachers in the district for coaching jobs since they are paid via a small stipend. So, it isn't like Tehachapi can advertise nationally for a head football coaching position, it does not work that way, most of the candidates will be internal.

Assistant coach Kris Krempien makes a ton of sense, he is in his second year as a physical education teacher at THS and took over most of the classes once taught by Steve Denman including those in the weight room, an important advantage to note. In addition, Krempien is a former head coach at Rosamond High School and was relatively successful with the Roadrunners taking them to a CIF Southern Section final appearance as well during his tenure. He spent the 2019 season as offensive coordinator for the Warriors, bringing in a new offensive system but willingly adjusting to the tools he had to work with. Krempien's presence in the program and current presence on campus makes him a natural answer.

Sources have confirmed that whoever the next head coach is they will inherit an initial challenge right off the bat as decisions for summer conditioning and weightlifting have not been made by the district. Not only was spring practice not allowed, but those same sources are also speaking about the school district's hesitation of allowing access to the weight room and other facilities over the summer for team activities. Such a nonsensical move would create both a competitive disadvantage for THS and potentially leave players exposed to injuries in the upcoming season. This sentiment was echoed by DeGeer and weighed into his decision to resign as well.

"With all of the setbacks this last year and current uncertainty, I really hope the district does everything within its ability to help put the program in the best possible situation to prepare our players for the upcoming year," he said.

That's what we all hope, and honestly, what we expect. Overcoming that challenge will be the first task of the new head coach for the Warriors, second will be rebuilding the program by leading them back into the postseason and eventually the first CIF Division III crown for the Warriors in over a decade.