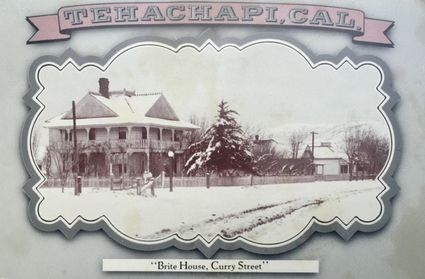 Even though the pictured home was destroyed by the 1952 Earthquake, at one time in the 1890s, it was the first home travelers would see as they drove up the narrow, winding road from Bakersfield and parts north into the town of Tehachapi.

Driving in on old Highway 466, the road made a sharp turn to the left and for a quarter of mile on Curry Street one traveled down a lane of orchards; pears on the right and cherries to the left. Then immediately to the left one viewed a classically beautiful home constructed in 1892 by Andrew Vance.

Tehachapi residents were proud of their stately homes lining Curry Street and gave it the name of Nob Hill. The pictured white two story home had upper and lower wrap around porches which caught one's fancy immediately. The gabled roof set the final picture as did a simulated "widow's walk" atop the home, outlined with a small, ornate wrought iron railing. Legend tells us that Vance built it for the John Brite family and that John Brite died in 1892 before moving into the home. No one can say for sure if his wife Amanda lived there with some family members.

In later years, the early 1930s, local businessman, Al Watts moved his family into the home and daughter, Mary Watts Farrell, as a young girl was impressed with the many rooms in the upstairs. They were not supposed to play on the upstairs porch but her brother, Allen, did.

The photo was obviously taken after 1915 when electric lights were first installed in the city. One can see the city street light in front of the home. C Street, which today runs past the building on that corner, seems to be missing in the photo but old maps show it was part of the city. Actually A and B Streets were added when the Carroll Tract was built about 1952. It was a wonderful neighborhood and made a good place for the Baby Boomers of that era to grow up.

Resurrecting the old home in print won't change today's events but sometimes it's good to go back in history to get a glimpse of those who once lived,worked, laughed and cried in our small town years ago.

One last note: The 1952 earthquake took down the lovely old home. The foundations of those days were redwood piling affixed under the home. They were sturdy and efficient except when the earth moved beneath the home. Then the pilings gave way and the house cracked and sank to its demise.