3Mules and the endless journey 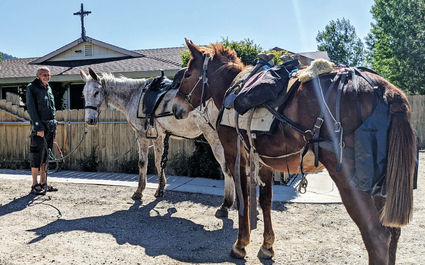 Pictured from left to right: Mule, Little Girl and Little Ethel in front of Norbertine Chapel.

Tehachapi is temporarily hosting an individual who is living in an ages old nomadic way of life.

He has been living in this unconventional manner for 37 years. He goes by the name Mule because he lives with his mules 24 hours a day, 365 days a year, and depends on them for his livelihood. One may question how safely a 73-year-old man can travel through cities, open country and on public roadways in California and the Southwest. The answer is the spiritual energy that is generated from this ages old stellar way of life which protects and guides them in any and all directions they choose to go.

He currently is traveling with two female mules, Little Girl and Little Ethel, hence the name 3Mules and the website http://www.3mules.com. Little Girl is 31 years old and Mule has owned her for 28 years. She is still doing great and he jokingly quips that he can still swear at her. Little Ethel is 12 years old and has been with Mule for three years. Mules can live into their 40s, some even into their 50s. His oldest mule was retired at 36 only because she was no longer able to do the work.

Why is he partial to mules and not donkeys or horses? As the offspring of a male or jack donkey and a female horse or mare, mules have inherited the best qualities of both. They are larger and faster-moving than donkeys, are sure-footed, are less picky about food and stabling than horses and are cheaper to maintain. They are durable, agile, smart and a superior animal for packing weight.

One might wonder why anyone would embrace living outdoors year after year. Mule relates that in the 1970s he began backpacking in the wilderness carrying weight on his back. He says that he is not really designed to carry weight on his back, so never really enjoyed doing it, and he could never carry enough to camp for very long. Mule trains would pass by him when he was hiking and he enjoyed getting off the trail to watch them. It occurred to him that if he got a mule it would improve his situation, so he began planning logistically and financially to get a mule. Eventually, about four years after he started backpacking, at age 36, he was ready to purchase a mule. He answered an ad in a Spokane paper and made a down payment on a two-year-old mule. The mule was a little too young, but as it was late in the season, he could afford to wait a year before putting the mule to use. He returned the next year for the mule, saddled it up and hung what he could off his riding saddle. He said it didn't always work out too well, but at least it was a start.

In the early years, Mule was only able to travel with his mules in the summers. As the years rolled by, he was able to increase his traveling time to about six months a year before he had to return to work. Once he retired at age 54 in 2001, he and the mules have been able to live outdoors full time.

When asked why he prefers to live like this, he replies that it is not his way of life but an ages old way of life that he is practicing. People have lived outdoors, close to nature, for thousands of years. A cursory glance at history indicates that living outdoors has survived every empire that ever existed. Empires come and go but this way of life, living close to the Earth, with respect and reverence for the Earth, is really the only way of life that is truly sustainable. Indeed, his and the mules' entire days are spent in direct contact with the Earth. As Mule says, they do not go to concerts or baseball games or spend time in buildings other than to go to the grocery store. They live in the here and now, intimately embracing their relationship with the natural world.

Mule hopes these values can be passed along to future generations and hopes that people do not forget where they are from. He wants them to remember that they are human beings and that they are part of this Earth. His term for the man-made world is megatropolis. He believes that people get lost in the glamour, glitz and endless discoveries of the megatropolis. One discovery leads to another and the cycle is endless. He believes that when people get tired of this artificial world they will want to return to their roots, where they were meant to be. And the mules will be there to take them back, to guide them to a more natural and time-honored way of life.

Mule relates that he and the mules keep themselves in shape by migration. They reside in different parts of the country during different seasons, their aim being to stay warm in the winter and cool in the summer. Since it is summertime now and heating up, they are going to migrate to the north. The mules typically forage off the land on a wide variety of plants, grass, seeds and grains, as well as donated hay, apples, carrots and other treats. In years past, he and the mules spent many years in the deserts and mountains of Wyoming, Colorado and Nevada ,; however, it became obvious that the public lands were being seized by private interests and projects that hampered the mules' ability to travel. About eight or nine years ago, Mule and his two companions began traveling exclusively in California. The three mules spend their time moving from one city to the next, even traveling the city streets of Los Angeles and San Francisco, among others. In the cities they usually have to walk down the streets, however, he cannot remember any bad experiences with the public. The mules just command respect by their very presence and by what they are connected to. People feel it. Because he is with the mules, he says he benefits.

An essential part of Mule's mission is to assert his and his companions' right to travel public thoroughfares. He states that vehicles, equestrians, cyclists, farm equipment and pedestrians all have the right to use public thoroughfares. Motorists are their biggest problem. The high speed motorists move at rates of speed often in blatant disregard for the law and recognition of others' legal right to use the road. It is imperative, he says, that the motorist do his or her part to safely share the public roadways. He and the mules move about two to three miles per hour, on the shoulder of the road if possible, and in the roadway if there is no shoulder. He believes strongly that it is not in his or in anyone's best interests to stand by passively and watch our freedoms disappear. If we do not have the right to move our bodies from one place to another in the manner we choose on public roadways, he believes we have no freedom. His use of public roadways, however, has elicited a number of legal charges and even arrests. The 3Mules are currently in a lawsuit against the State of California and the California Highway Patrol for what he believes was an illegal arrest and impoundment of his two mules in January of 2021 in Templeton, California.

One of his primary challenges is finding a place for him and the mules to sleep. It is illegal in the state of California to sleep on the ground in any public area. He has been arrested a few times for refusing to get up in the middle of the night and travel down the road in the dark searching for another place to sleep. Private land, of course, is different as they can spend the night with the owner's permission. One of the features of the 3Mules Facebook page is a Mule Tracker showing their current location. People will often message him and offer to host him and the mules when they are in their area.

Mule supports himself with a very meager Social Security check and donations from kind folk who give him cash as he is traveling. If he needs something in particular he posts that on his Facebook page and always has that need filled. He says he and the mules are very well supported and support is growing.

Mule believes that the 3Mules journey is a gift to us all as a wake up call to use and protect our freedoms in this country. He gets messages and emails from people all the time telling him how inspired they are and how they appreciate what he is doing. How much effect he is having he says is intangible – it just simmers like a pot of stew and you do not always know what the end result will be.

When asked how long he is going to continue living in this manner, he responds that he is going to continue for as long as he can. He is dealing with old age and making the necessary adjustments to keep it all going. For more information on the 3Mule journey and ways to support the three mules, visit http://www.3Mules.com or the 3Mules Facebook page.