90 days of spring to savor 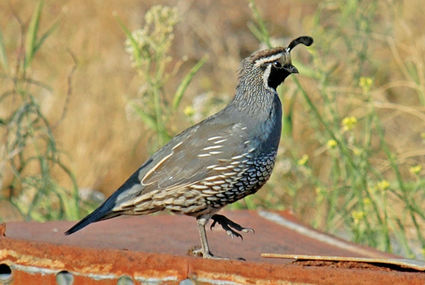 A male California quail keeps an eye out for danger.

We are now in the middle of spring in the Tehachapi Mountains, and despite an extremely dry winter, there are still flowers blooming, birds singing and nesting, reptiles emerging and the other sights and sounds of the gentle season.

Although most local areas reported less than four inches of rain this year, some wildflowers, as always, have managed to bloom. California Poppies are opening their bright oranges faces to the sun each morning, closing each evening, and on overcast days or when it is too windy for them.

There are also Grape Soda Lupines flowering on road cuts along Tehachapi-Willow Springs Road as you descend Oak Creek Pass. These extremely hardy wildflowers can grow in rocky, nutrient-deficient soil in part because they are in the Legume plant family, and have nitrogen-fixing bacteria in root nodules that can take atmospheric nitrogen and deposit it in the soil where it becomes available for them to use.

I've also seen Western Wallflowers, Indian Paintbrush, Evening Snow and other wildflowers in bloom. Their hardiness in the face of drought conditions impresses and inspires me.

Lilacs, those familiar ornamental shrubs that are grown through the Tehachapis, have actually had a great year. They are adversely impacted by wild swings in the weather, and this winter and spring have been pretty stable, with fairly cool days and consistently cold nights. The old-fashioned blue varieties, the hybrid purples, even the more sensitive whites – they've all had lots of blossoms.

So why do lilacs do so well in Tehachapi? Because the traditional varieties of Syringa vulgaris – common lilacs – require 2,000 hours or more of weather that is below 45 degrees Fahrenheit. Known as "chilling hours," this cold period is required for the plants to bloom. People can and do plant lilacs down in Bakersfield, and sometimes the shrubs grow well and appear to thrive, but they bloom little or not at all. There have been some varieties developed for Southern California, such as one called "Lavender Lady," that don't require as many chilling hours, and gardeners at lower elevations sometimes have good luck with these. Here in Tehachapi, though, no special kinds are required – lilacs simply flourish at our elevation and enjoy our cold winters.

Lilacs have been grown in Tehachapi for 150 years, since the old-fashioned varieties were planted by some of the first settlers and they remain an excellent, low maintenance choice – every Tehachapi garden ought to have a least one delicious-scented lilac plant to help welcome spring back into the mountains.

California quail have paired off and begun their first nests of the year. If they are successful and feed is available, they will often double-clutch and make a second nesting attempt later in the summer. Their "come-back-here" call is part of the soundtrack of life in the inland California mountains.

Reptiles have also emerged with warmer temperatures, and I've been seeing lots of lizards and a few snakes. This will not be welcome news to anyone with ophidiophobia – the irrational fear of snakes, which is reported to affect one-third of all adults, making it the single most common phobia of humans.

However, of the assorted snakes in the Tehachapi Mountains, only rattlesnakes pose any threat to people and, if given the chance, they would prefer to avoid an encounter even more than you would.

Great Basin gopher snakes and California Kingsnakes are both far more common than our Northern Pacific rattlesnakes, and Western fence lizards (bluebellies) and Western side-blotch lizards are a hundred times more common than any snakes. So the return of reptiles is not a reason to be leery of spring.

I always remind myself that spring only lasts 90 days, at least officially, so it should be savored while it's here, before we transition to the hotter days of summer. 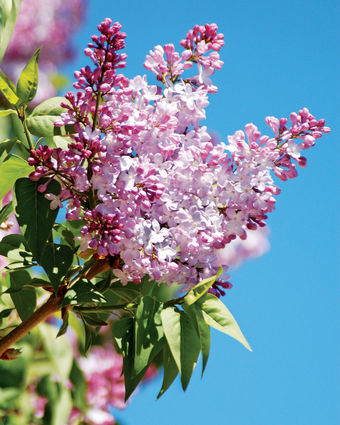 Lilacs have had a good blooming year in 2021.

There have been many pleasant observations written about spring, and this is one of my favorites: "It is spring again. The Earth is like a child that knows poems by heart," from German poet Rainer Maria Rilke.