This is the 13th article in a continuing series about local military veterans and their service to our great country.

"For the whole earth is the tomb of famous men; not only are they commemorated by columns and inscriptions, but there dwells also an unwritten memorial of them, graven not on stone but in the hearts of men." Pericles (c. 600 B.C.)

Jason Everett George was born in Bakersfield on Nov. 3, 1971, the son of Hugh and Candace Mason (Jason's biological father was Clyde George). "JG" grew up in the high desert of California. He was passionate about the Los Angeles Dodgers and American automobiles, while one of his "quirks" was wearing shorts, even in the coldest temperatures. Jason was one of those rare souls with real charisma.

At Tehachapi High School Jason played a variety of competitive sports, kicking the winning field goal in the finals of the Desert Inyo League Championships his senior year. He graduated in 1988 as salutatorian (second highest academic rank in his class). By this time in his young life he had also become an Eagle Scout, had worked for NASA, played in a marching band, and been elected president of his National Honor Society. Jason, in fact, had become the "all American boy!"

Following high school, Jason enrolled at California State University Bakersfield (CSUB), immersing himself in the academic, social and political activities of the college. He served as social chairman of the Sigma Pi Fraternity, intramural sports chairman and vice president of the Inter-Fraternity Council, while also finding time to be active with the University Republicans Club and the lesser known Scholastic Surfing Association.

After a year of study at CSUB, Jason received a prestigious appointment to the West Point Military Academy (he had also been accepted by the Navy and Air Force academies), eventually graduating second in his class of about 1,400 cadets. In 1994, he was commissioned as a second lieutenant in the Army and, as was his wont, he fearlessly tackled the many new challenges at hand. Serving eight years as a combat engineer, he earned his Ranger tab, became a distinguished graduate of the Armor Officers Advanced Course and deployed to Bosnia, before finally being stationed in Savannah, Georgia.

Jason left active duty in 2002 and matriculated at the University of Michigan Business School, where he earned an MBA. Again, while at Ann Arbor, he was extremely active, playing for the UMBS Rugby Club and, inter alia, serving as the admissions ambassador, as well as the fundraising chair for the Go Blue Rendezvous (an event hosted by the business school for incoming MBA students). After receiving his MBA, Jason moved to Chicago, where he worked as a healthcare consultant. At the time, he was also serving in the Army Reserve, meeting his drilling obligations as a liaison for the West Point admissions office.

In early 2009, Jason was recalled to active duty and assigned to the 1-252nd Combined Arms Battalion in Iraq. According to an article in the Los Angeles Times, Ted Williams, a friend of Jason's who roomed with him at West Point said, Jason might have been able to use his Reserve duty at West Point to "pull strings" to avoid duty in Iraq.

"A lot of guys would fight it, or hire a lawyer to get out of it, but he didn't. He said, 'This is my duty and I'm gonna go.' He had no hesitation, which is a real tribute to how he felt about his country," Williams said.

Indeed, Jason did not shrink from his nation's call, but stepped forward boldly to embrace it. He flew into Kuwait on April 22, 2009, and reached his destination, Baghdad, by May 5. In the war-torn Iraqi capital Jason was assigned one of the most challenging and complex tasks a soldier could ever be given – to help the Iraqi people stand on their own. His mission was to help revitalize the Iraqi economy – e.g., by promoting electricity generation, water, education and health care – while his brothers in arms continued to target and eliminate the enemy networks that were terrorizing the Iraqi people and Coalition Forces.

On the fateful morning of May 21, 2009, Major George and supporting military personnel planned to meet near an outdoor market in southern Baghdad with the leadership of the Dora Market Businessmen's Association to discuss ongoing revitalization of the local business community. As the U.S. soldiers entered the appointed building, they were suddenly attacked by a terrorist outfitted with an improvised explosive device suicide vest. In the ensuing blast, Jason, 38 years old, lost his life along with two national guardsmen, 1st Lt. Leevi K. Barnard (28, of Mount Airy, North Carolina), and Sgt. Paul F. Brooks (34, of Joplin, Missouri); other soldiers were seriously wounded, while a number of innocent Iraqi civilians were injured and killed.

Because Jason E. George had touched so many lives in such meaningful ways, his death elicited an outpouring of grief in local newspapers (including the Los Angeles Times) and on social media. These included the following:

• "Jason was a man in full. His honor, intelligence, competitiveness, loyalty and humor are unmatched. The United States has given one of its best with his passing. May God bless and comfort his family, friends and fellow soldiers. Rest in Peace, Jason." (Justin Gernot)

• "I fell in love with Jason when my family and I met him on the day we took our son Spencer to West Point. I watched JG grow into a truly kind, considerate and totally genuine young man in those next four years, and then afterwards into a fine and capable Army office ... He was a universal man and a good friend to so many who will now sorely miss his presence on this earthly plane. Heaven has indeed gained a new star...and I shall treasure the thought of seeing him again there one day." (Sherry Kympton)

• "I am deeply saddened that such a beautiful man, inside and out, has been taken from our grasp. God Bless you Jason. Your commitment to service is why I am able to see my children and family every day. Words cannot express my gratitude. Your beautiful smile, your commitment, will never be forgotten." (Julie Benz Sanchez)

Jason always sent both his mother and grandmother flowers on Mother's Day. And he worried about his terminally ill grandfather. In his final email from Iraq, he asked if he could make a call to the doctors who were in charge of his grandfather's care. He ended every call with, "I love you mom, I love you dad."

Jason was the first of his West Point class to perish in direct combat. He was also the first person to be buried at the Bakersfield National Cemetery. His awards include: the Meritorious Service Medal, Army Commendation Medal, Army Achievement Medal, two National Defense Medals, Army Service Medal, and Iraq Campaign Medal with Bronze Service Star, as well as posthumous Bronze Star and Purple Heart Medals.

For more about Jason, please consult the Jason George Memorial Foundation, a 501(c)(3) organization "founded to honor the memory and values of Major Jason George" by supporting veterans, promoting civic service, and providing scholarships to those who serve, jgf.clubexpress.com.

Local veterans are invited to join VFW Post 12114, founded in Tehachapi by five veterans in honor of Major George. Alex Athans is the current Quarter Master; the post's phone number and website: (661) 979-4250, http://www.tehachapivfw.org. 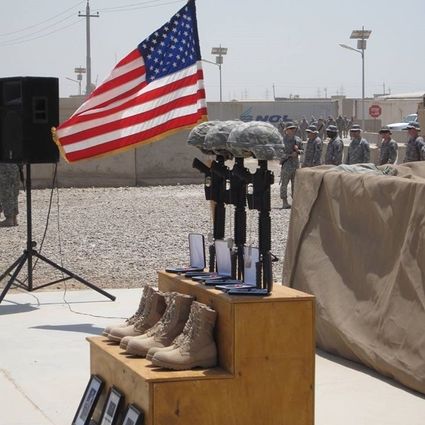