Spring: the Season of baby animals 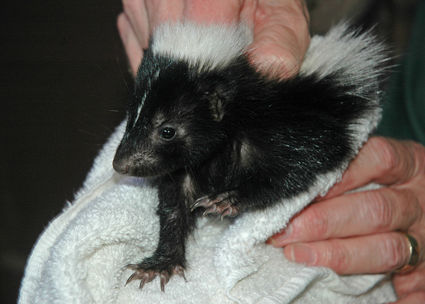 An orphan skunk that I raised with two of its siblings after they were accidently entangled in a fishing net.

Spring has now permeated throughout the Tehachapi Mountains, from the lowest elevation foothills at about 500 feet, just above the San Joaquin Valley floor, all the way up to the highest mountains above 7,000 feet.

Along with the warmer weather and longer days, spring also signals that the Animal Kingdom has shifted its focus onto reproduction. Spring means baby creatures – mammals, birds, and even amphibians are most likely to produce offspring during the fruitful, fertile months of the vernal season.

So why is spring the time when the majority of animals expand their families? It's mostly due to water, temperature and grass.

The precipitation of winter (not that we had much this past winter) brings forth a flush of new grass and other vegetation, providing food for many of the smallest creatures. These animals, like mice, voles, gophers, ground squirrels, rabbits and others, time their litters to arrive when feed is most available, both for the emerging young and for the nursing mothers.

These animals, at the lower part of food chains, in turn provide food for predators, which try to synchronize the arrival of their own young to take advantage of the bounty of young prey species.

The proliferation of new grasses and flowering plants serve as nutrition not just for grazers, but also for a vast array of insects and other invertebrates. These then serve as food for many bird, mammal, reptile and amphibian species.

Even songbirds that are primarily seed eaters as adults will turn insectivorous during nesting season, when they bring nutritious insects to feed their nestlings, who need a protein-rich diet to grow rapidly.

Spring is the time that most birds start their first clutches, and through the Tehachapi Mountains, birds from many different species have paired off and are now building nests or incubating eggs. From the largest birds like hawks, eagles, ravens and vultures, down to the littlest songbirds and hummingbirds, this is the time of year that they concentrate on courting, mating and nesting.

Most amphibians, including frogs, toads and many salamanders, depend on spring for reproduction because they need to lay their eggs in water, where the emerging tadpoles will live. These little amphibs prefer ephemeral ponds, which dry out in summer, because these temporary bodies of water are usually free of predatory fish that would eat the eggs or tadpoles. 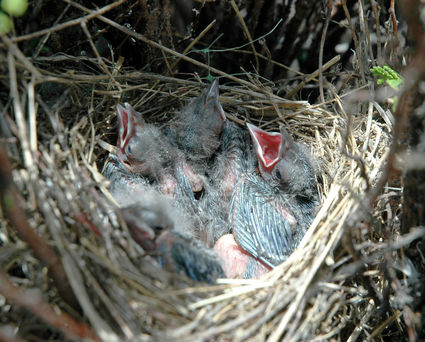 Naturally, these shallow pools are only around in late winter and spring, so that is when the next generation of amphibians is produced. The young also tend to leave these ponds en masse, over just a few days, so that their numbers overwhelm predators who would otherwise pick them of a few at a time if the little toads and frogs emerged over a prolonged period of weeks or months.

As if spring didn't have enough good qualities already, the abundance of animal babies is another reason to cherish this season of renewal. . .