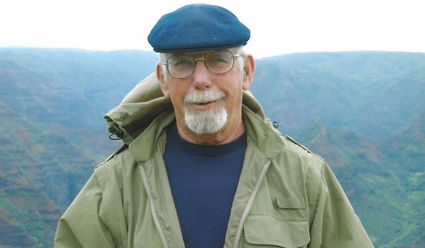 Paul David Doody was born on June 26, 1932 in Brockton, Massachusetts to Rose Diauto and Arthur Doody and the clash of his Italian/Irish heritage would be with him his entire life. His only sibling John was born a few years later. Arthur started an insurance office in Randolph and the Arthur L. Doody Insurance Agency would continue until John sold the business in the mid-1990s. Rose continued with the business until she was 75.

The boys were educated in a private elementary school and then sent to St. John's Prep in Danvers for high school. Paul sometimes worked in the cafeteria and always said it was a great place for getting pastry treats from the nuns. Both Paul and his brother chose Stonehill College, a small liberal arts college in Easton, Massachusetts where Paul majored in Biology. But graduation would have to wait. It was during the Korean War and Paul surprised his parents when he announced that he had joined the Navy. He was trained as a combat medic but never had the chance to go overseas as the war soon ended and he completed his tour of duty stateside. Remaining in the reserves, Paul returned to Stonehill to complete his education working nights at the local VA Hospital in the psychiatric ward.

It was during this period that Paul was introduced to Mary Keelan, whom he would marry following graduation. Paul was accepted into graduate school at University of Notre Dame in South Bend, Indiana, so off the couple went. He taught and worked in the lab while working on his degree and made a little extra money tutoring the Notre Dame Football team as all players had to have passing grades if they wanted to play. Their daughter, Maura, was born that year. Paul said that one winter in South Bend was all he could stand so he transferred to Tulane University in New Orleans to complete his Master's degree. Their son, Paul Jr., was born in Louisiana.

Paul had always wanted to see the world, so when he received his master's degree in teaching Biology and Chemistry he chose a science teaching position at St. Augustine's College in Cape Coast, West Africa (now Ghana), an emerging African nation. The college was the equivalent of secondary school in the United States but used the British system of education, quite a change for Paul. Their daughters Sioban and Monica were both born there in a mission hospital.

The family moved to Accra, Ghana when Paul was offered the opportunity to set up the first Fulbright Program in sub-Saharan Africa. He was attached to the U.S. embassy in Accra, a job that allowed him to travel throughout Europe. During one trip he had the opportunity to meet and visit with Bobby Kennedy who was visiting the U.S. Embassy in Germany.

Political unrest in Ghana resulted in the Doody family returning to the states. Still attached to the State Department, Paul worked for about ten years as an escort for African dignitaries who were visiting the U.S. The family moved to Los Angeles so Paul could work on his doctorate at UCLA, a project he would never complete. Their youngest daughter, Rachel, was born soon after their move to Los Angeles. Paul and Mary divorced in the mid-1970s.

Paul never stopped traveling. He was hired as a professor for the World Campus Afloat Program sponsored at the time by Chapman College in Orange County; however he was never given the chance to teach. Once the school learned of his world travels, he became the advance coordinator for the ship, traveling to each port ahead of the ship to make sure all arrangements went smoothly. It was also Paul who had to track down students who somehow managed to occasionally miss the ship's departure.

The ship covered about 41,000 miles and visited 35 countries during that year and by the end Paul was well versed in cruising, opening new career opportunities. He was District Sales Manager for several cruise lines including Pacific Far East Line (Hawaii) and Costa Cruises (Caribbean and Mediterranean). He met a travel agent from the San Fernando Valley named Patricia Kramer Ortega. They were married in 1980 and Paul became step-father to Charles and Cristina Ortega.

The couple decided to open an insurance office in Burbank until Cristi went away to college to study graphic design. An opportunity to sell insurance in the Sierra Foothills and a desire to get out of Los Angeles took them to Auburn where they stayed until Charlie completed high school and sowed the seeds of a budding music career. When not selling insurance, Paul took this opportunity to go back to school and learn hypnotherapy, a modality he did not have an opportunity to practice until 1990.

Now empty-nesters Pat and Paul moved to Albuquerque, New Mexico where Paul joined a small online university teaching Transpersonal Psychology and opening a hypnotherapy practice. Having rediscovered teaching, it wasn't long before he began teaching in the Albuquerque public schools, first as a substitute teacher and then as a full time science teacher while remaining on staff of the online university.

When Pat's mother was diagnosed with Parkinson's disease, the couple returned to Los Angeles as her caretakers and Paul continued to teach online. It was there that they got the only dog they ever paid money for; an Alaskan Malamute who grew to be a 130-pound alpha female and Paul's best friend. They retired to Ojai, California where they lived for ten years learning to ride and train horses, delighting in trail riding and horse camping with their Rocky Mountain gaited horses. They had just remodeled their house when the housing crunch hit in 2009. While looking for affordable ranch property, they heard about Bear Valley Springs and bought a 5-acre ranch. When Paul quit riding at the age of 82 and the ranch became too much work, the couple moved into Tehachapi.

Following their move into town Paul and Pat adopted an older dog named Elsa who became Paul's daytime companion while Pat was at work at The Loop newspaper. Every other weekend he accompanied Pat delivering The Loop in Bear Valley and Cummings Valley. It was a social event for him. He was active with Alanon and following the death of his son Paul Jr. in 2018, he found a great deal of comfort in the Grief Share Support Group at Country Oaks Baptist Church. He loved working as a docent at the Tehachapi Visitor Center and, until his sudden passing, was looking forward to its reopening this spring.

He leaves behind his wife Pat, brother John and his family, daughters Maura, Sioban, Monica and Rachel and their families. Also left are Cristi and Ben Rodriguez and their family and Charles and Roberta Ortega.

There will be an online memorial for his family and friends back east on May 1 at 6 p.m. and a Celebration of Life at Triassic Vineyard, in Tehachapi, on May 27 at 5 p.m.