Kiwanis honors George Novinger for service to youth and community 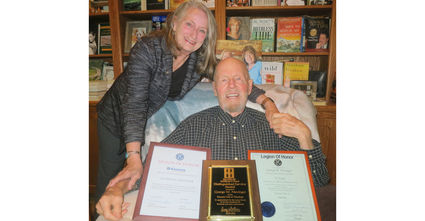 In recognition of George Novinger's service to youth and the community, the Kiwanis Club of Tehachapi is proud to honor the 37-year Kiwanian with the Kiwanis International Legion of Honor as well as the club's 2021 Distinguished Service Award.

Kiwanis Division 33 Lt. Gov. Ron Gaiser, a member of the Tehachapi club, presented the Distinguished Service Award plaque to Novinger at the recipient's home in Tehachapi on March 23. Club President Tina Cunningham presented the embossed Kiwanis International Legion of Honor and the club's Legion of Honor certificates on March 25, also at his home.

"I really enjoyed my work with young people, and I am honored by these awards," Novinger said.

Occidental College graduate and outstanding collegiate football player, Novinger, 88, was principal of Tehachapi High School from 1982 to 1992 and joined the Kiwanis Club of Tehachapi in 1984. Prior to moving to Tehachapi, he was vice principal at Hoover High School in Glendale, where he began his career in education in 1955 as a math teacher. He was Boys Advisor and Key Club Faculty Advisor, personally driving Key Club leaders to conventions all over California, accompanied by his wife Anne Marie, whose tireless work for Kiwanis has earned her Honorary Member status. While in Glendale, Novinger served as captain of the Montrose Mountain Search and Rescue Team.

At Hoover High, he developed a comprehensive course in Aerospace Science and coached football and swimming. His Hoover swim team won the CIF Southern Section Championship in 1962.

"He stays in touch with former students and has been invited to numerous class reunions," Anne Marie said. "The students tell him wonderful stories about how their participation in athletics and his coaching impacted their lives. Some of his football players even remember the exact game and exact play that changed their lives."

In Tehachapi, Novinger supported the Tehachapi High School Leadership Camp at Kern County Mountain Park, a successful multi-day event that took place over many summers. He spent 20 summers as a Ranger Naturalist at the Ancient Bristlecone Pine Forest in the Inyo White Mountains east of Bishop.

A charter member of the Tehachapi Pilots Society, Novinger flew his own airplane for 50 years.

The construction of the new Tehachapi hospital owes much to Novinger, who served as chairman of the bond drive for Measure J, the first bond for the hospital, which passed with a California record-breaking 80 percent. He chaired the Tehachapi Hospital Citizens Bond Oversight Committee and was vice president of both the Tehachapi Hospital Foundation and the Greater Tehachapi Chamber of Commerce. He and Anne Marie were named Tehachapi Citizen of the Year in 2008.

Kiwanis is a service club dedicated to serving the children of the community and the world. Visitors are welcome to our hybrid meetings. Call Tina Cunningham, (661) 822-4515.