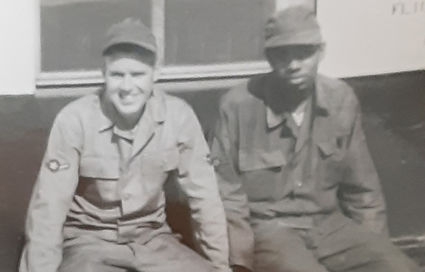 This is the 11th article in a continuing series about local military veterans and their service to our great country.

Tom Morris came into the world on March 13, 1943-born during a blackout in the middle of World War II. As he recalled, "Everything was blacked out due to the military aircraft companies (Douglas Aircraft Company, North American Aviation, etc.) and naval ports in the area. I should add that I was the first male baby born at St. John's Hospital in Santa Monica." Tom's mother was a stay-at-home mom who had moved to California in the late 1930s from Rapid City, South Dakota, where she had been chosen "Miss Rapid City."

"She was a very beautiful woman," he said.

Tom's father worked as an engineer for North American Aviation, and "was probably the only person who ever sat in all of Jimmy Doolittle's B-25B bombers," which conducted the raid over Japan in April 1942 that electrified an American nation desperate for a military success over Japan in the early months after Pearl Harbor. Tom's father went on to become a production manager for the famous P-51 "Mustang" fighter (also built by North American) until drafted into the Navy in late 1944. In the Navy, he soon contracted scarlet fever and was sent to a Navy hospital in San Diego. He survived the serious disease but the sailors in the beds on either side of him did not.

Recovering and back in training, he was assigned to the destroyer USS Storms (DD 780), but was soon in the hospital again-this time with a double hernia. As a result, he was unable to ship out with his vessel, an act of Fortuna that most likely saved his life. The destroyer was struck by a Kamakazi aircraft, killing 21 and wounding 15; the Kamakazi had hit precisely where his battle station was located (he had been trained as a loader on a 40 mm Bofors anti-aircraft gun crew).

Tom went to Arcadia High School in the San Gabriel Valley, where he met The Loop newspaper's owner, Claudia White Baker (neé Needham). She became Tom's first girlfriend. In high school he participated in basketball, track, tennis and football (the latter being his main sport), graduating in June 1961. After graduation, Tom got a job at the local Broadway Department Store, part of a major chain at that time. He worked in the store's distribution center in Los Angeles, driving to work in a 1942 Ford, a vehicle that was quite rare, because Ford had by then transitioned to making tanks for the war effort instead of civilian cars and trucks.

The department store had a nasty habit of terminating employees at 90 days, so it didn't have to offer raises. Tom was aware of this, and, thus, was convinced that the same unhappy fate awaited him upon reaching the 90-day threshold. So what did he do? He enlisted in the Air Force in February 1962, totally unaware that management had been grooming him for a better position! Indeed, he was actually offered a raise and a technical position in the printing department, but, alas, Tom, like Caesar, had already "crossed the Rubicon!"

Tom was soon aboard a train winding its way toward Lackland AFB, Texas, for basic training. Also aboard the train was a clutch of newly-minted Marines, whom Tom encountered in the dining car. As Tom remembered it: "One of the Marines must have been misbehaving, because their drill instructor stood up and barked at him, 'watch that [mouth] of yours, or I'll crack it open!' I thought to myself: 'If this is how we're going to be treated in the military what have I done?' I was wishing I was with my three buddies who'd gone off to college."

Tom's train pulled in to Lackland about 4 a.m. (A good California boy, he was clad only in Bermuda shorts and a Hawaiian shirt, oblivious to the fact that the weather in Texas was freezing cold!) He and the other recruits were "greeted" at the bus (that was to take them on to the base) by their drill instructor, who had a warm and fuzzy message for the tired and bleary-eyed recruits: "My name is Sergeant Ducho, and you're all gonna hate the day you met me!" But Tom made it through boot camp with flying colors; in fact, he was selected among the recruits as one of the squad leaders for basic training:

"It was kind of scary, but we all managed to get through it," he said.

Tom completed basic in April 1962. Then it was on to technical school at Shepherd AFB, Texas, for training as a reciprocating engine (i.e., piston engine) aircraft mechanic. In September 1962, Airman 3rd Class Morris was sent to Wheelus Air Base (Tripoli, Libya) on an 18-month assignment. Tension and excitement was not long coming, as the base soon found itself on red alert during the Cuban Missile Crisis of October 1962.

"Our fighter aircraft at the base were outfitted with ordnance for a possible war with the Soviet Union," he said.

From June to September 1963, he went TDY (temporary duty) to Vietnam, where he was assigned to an air base in Saigon and worked as a mechanic on AC-47 gunship engines. On the final day of his TDY-and this at a time when few Americans were even aware of Vietnam, and the conflict slowly simmering there-while flying into Saigon on final approach after an engine check, Tom was shot in the foot by Viet Cong small-arms fire (a shell had penetrated the bottom of the fuselage and his boot). Although he hardly felt the wound, he observed blood oozing onto the floor and realized he'd been shot. During this first sojourn to Vietnam, Tom was awarded the Purple Heart and the Bronze Star for his service. As he explained to me, "I also took part in a couple of missions that I really can't talk about."

Returning to Wheelus AB, Airman 1st Class Morris (he had been promoted while in Vietnam) was detailed to the Marine Corps to do helicopter maintenance. The Marines had two Sikorsky, multi-purpose, piston driven, H-34 helicopters at Wheelus; problem was, however, they had no mechanics to work on the engines. Eventually, Tom was approached by a Marine Corps colonel with a rather unique proposition: would he consider transferring to the Corps? The colonel sweetened the deal by assuring Tom he would be promoted to E-5 in both the Marine Corps (i.e., sergeant) and the Air Force (staff sergeant). Tom agreed to the transfer. (Note: despite the transfer, he was still assigned to the USAF for administrative purposes).

In March 1964, the Marines sent Tom to San Diego for additional training, including combat training. In May, he moved on to Edwards AFB, where he was assigned to a helicopter squadron as a (reciprocating) engine mechanic. He recalls: "This was a most exciting time at Edwards. I saw the first landing of the XB-70 'Valkyrie' bomber. There was also the X-15 hypersonic rocket-powered aircraft, and all kinds of other experimental planes." Soon, however, the Marines introduced the CH-46 "Sea Knight" helicopter, with two jet engines. So, once again, Sergeant Morris was off to school-this time in Long Beach to learn how to work on the CH-46's engines.

In September 1964, Tom began a standard one-year tour in Vietnam, stationed at Na Trang Air Base as part of the 1st Marine Division.

"As far as I know we were the first Marines to have boots on the ground in Vietnam. It was pretty clandestine. Our mission was rescue, mercy and hygiene missions. We went [via helicopter] into villages with the doctors. We taught the villagers proper childbirth, we deloused them, cleaned them up, provided them with soap and shampoo. We took seriously ill people into the base at Na Trang for surgery," he said.

Tom would fly 54 of these missions during his second tour in Vietnam.

At Na Trang, he also worked on C-123 transports, modified with specially developed spray tanks to discharge "Agent Orange" (a herbicide and defoliant chemical) in missions designed to deprive the Viet Cong of food and vegetation cover as part of Operation "Ranch Hand," the U.S. military's chemical warfare program in Vietnam that lasted from 1962 to 1971.

"We had no idea at the time how lethal [Agent Orange] was and it had a horrible smell," Tom explained. "Many of the men I worked with, or crew members of those C-123s, have since passed away from cancer, perhaps due to exposure to Agent Orange. Our government in recent years has finally acknowledged the lethal problems caused by exposure to it."

About a month into his tour, Tom, while returning from a mission, looked down from his Marine Corps helicopter to see smoke billowing out his hotel (where he and his men were billeted). Viet Cong guerrillas had destroyed the hotel with explosive charges.

"This was when I realized that we really couldn't tell friend from foe. I saw some terrible things that happened to the Vietnamese people. The South Vietnamese Army could be quite cruel to anyone they suspected of being an enemy, or supporting the enemy," he said.