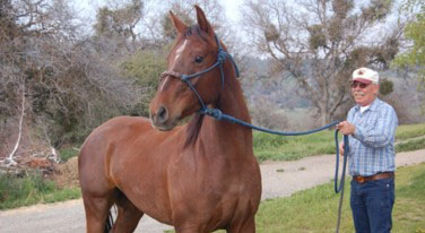 Daniel (Danny or Dan to most) Bennett Freng passed away in the early morning hours of March 18 after a short, but brutal, battle with metastatic lung cancer at Antelope Valley Hospital. He was 77 years old.

He was born to Frances (Anderson) Freng-Gors and Percy Bennett Freng in Yankton, South Dakota on December 8, 1943. Spending his young formative years on the family farm, Danny developed a love for animals and farm life that would stick with him forever. After his father passed when he was young, his mother remarried a gentleman named Ralph Gors. The newly blended family then moved to Great Falls, Montana in 1952 and eventually to Tehachapi in 1956 where Danny attended the local junior high (at that time located where Tompkins Elementary is now). He went on to graduate from Tehachapi High School in 1962. During high school, he was involved in sports and what was then known as the Tehachapi Valley Future Farmers of America.

After high school he enlisted in the U.S. Army and proudly served from 1963-1966, where he was stationed in Germany for most of that time. After his service, he moved back to Tehachapi and in 1966, he married a local girl, Carol Smith. They had two children and settled in Keene. He also started working at Monolith Cement Plant where he was employed for a couple of years. In 1968, he began his career at the California Correctional Institution as a correctional officer. After 32 years at CCI, he retired in October 2000. He went back as a retired annuitant for a few more years. He then worked as a part-time security guard for Wackenhut Security for a couple of years.

In the mid 1970s, he and Carol divorced. He was a single father who eventually met a single mother, Lisa Kubicek. She and her son, John, had recently moved to Tehachapi from Corona, CA. They would soon blend their families together and marry in February of 1980. Together they had two more sons, Joshua and Jeremy. They were married for 38 years, until Lisa's passing in 2018. During their time together, in addition to raising their large family, that eventually included seven grandchildren and three great grandchildren, they enjoyed the farm-life with horses, goats, cows, and lots of dogs. Danny was an old cowboy at heart, born 100 years too late. He was happiest while on the back of a horse riding across a trail in the mountains or desert, chasing cows on the range, or in an arena team penning. Much of that time was on his beloved Paint horse, Princess, who he purchased as young filly in 1984. He proudly trained her from the ground up. In the early 1990s, he began volunteering with the Tehachapi branch of the Kern County Special Olympics. For several years, he and Princess, along with many other local volunteers, would teach Special Olympic athletes how to ride horses and then participate in playday-like competitions. He was extremely proud of his time volunteering with Special Olympics. He loved the "kids" and they loved him.

After the passing of Lisa in 2018, he was a grieving widower who soon found new companionship with his also recently widowed neighbor, Lori Powell. Together, they traveled (as much as COVID would allow) in her RV throughout California and Arizona. She was a bright spot for him these last two years, bringing him much joy and happiness.

A Mass will be held on Thursday, March 25 at 9 a.m. at Saint Malachy. A small reception for the family will immediately follow. In lieu of flowers, donations can be made to the Bakersfield Rescue Mission.