The Sierra Wave and gliders

You know how you feel when the wind is howling and you see the standing lenticular clouds, (the clouds that look like flying saucers), when looking north? I know I don't want to go outside at all. On the other hand, there are people who look forward to those days. Jim Payne and Bob Harris come to mind. They like flying high and fast in gliders when the Sierra Wave is working.

It was a great day with many surprises. First, Jim Payne flew Bob Ettinger's glider to Mojave from Rosamond Skypark. He trailered it home the following day. The second surprise was when Burt Rutan and Scaled Composites decided to showcase WhiteKnightTwo and SpaceShipTwo, because as Burt stated, "Spaceship is a glider!"

When visitors walked onto the flightline they were absolutely stunned! What a magnificent sight to see WK2 and SS2 up close and personal!

The sheer size of the magnificent "Mother-ship Eve" with SpaceShipTwo "Enterprise" was awe-inspiring and overwhelming!

One hundred-fifty people attended Jim Payne's presentation "Sierra Wave – Friend and Foe." Payne explained how the wave helped him achieve all of his speed and distance records, but how small powered aircraft can experience structure threatening damage if they remain in the wave's rotor.

Lenticular or lens shaped clouds are indicators that the wave is working. Sometimes they look like a UFO or a stack of pancakes!

Lenticular clouds form when a current of moist air is forced upwards as it travels over a mountain, causing the moisture to condense and form a cloud. Sometimes the air is forced into a wave pattern, generating what is known as a wave cloud. Wave clouds can look like strings of discs spreading out from the leeward side of the mountain.

Cam Martin donated a beautiful print to the MTM, of a painting by aviation artist Mike Machat, of the record-breaking flight Harris accomplished in the Sierra Wave. 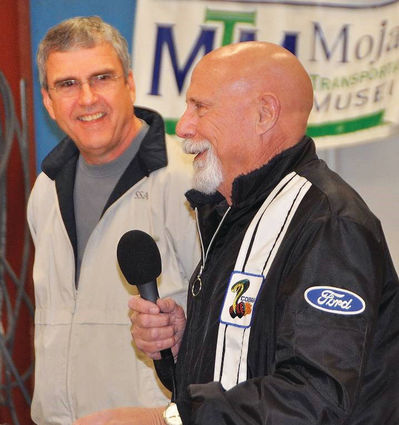 Harris took off from California City Airport, reached 49,009-feet over Mt. Whitney and then landed at Inyokern Airport. The original painting hangs in the Smithsonian National Air & Space Musuem's Udvar-Hazy Center at Dulles International Airport. Mr. Machat was on hand Saturday to personally sign this print, as did Mr. Harris.

Cam sent me an email and said, "The Libelle is typically aero towed and launched by a Piper Pawnee, but now dreams of being carried aloft by WhiteKnightTwo!

The sailplane community lost their dear friend Bob Harris on Oct. 6, 2018, but he will always be remembered for his quick smile, love of soaring and willingness to help.

So, next time you see those lens shaped clouds and the wind is howling, just know that there is a glider pilot somewhere who is itching to get into the air.