Lew Thornton: Child of the Great Depression, defender of freedom in South Korea 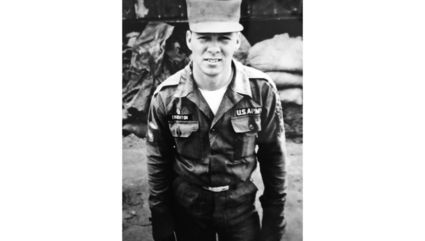 This is the ninth article in a continuing series about local military veterans and their service to our great country.

Lew was born in the little town of Crosbyton, Texas, on August 3, 1935. He was the oldest of three boys, the youngest brother dying in a tragic accident in 1939. As Lew recalled: "This was during the Great Depression and nobody really had anything. My father took any job that he could-he shoveled coal out of a coal car at a railroad station; he drove a truck; he picked grapes and cotton; he did anything to keep our family going."

Despite the desperate efforts of the Roosevelt administration, the Great Depression would not end until the advent of World War II. When the United States entered the war in December 1941, it finally eliminated the lingering effects of the Depression, dramatically reducing U.S. unemployment; indeed, the massive spending on the war effort doubled economic growth rates, while some 17 million men went off to war against the Axis powers.

One of these men was Lew's father, who fought as an Army infantryman in the Pacific theater, where he saw combat and was wounded on the island of Okinawa in 1945.

"He didn't like to talk about [his war experiences] too much," Lew said. "He returned home in mid-1945 after he was released from the hospital. All I remember is that he would wake up in the middle of the night and he'd be in a cold sweat. He told me he was 'reliving what happened overseas.'"

Eventually, Lew's father became a truck driver, driving a semi-truck for many years. He would also find employment as a police officer in Los Angeles.

Lew's family had moved to California in the late 1930s. He attended Glendale High School, where he played football and ran track, graduating in June 1954. While in high school, he took an ROTC (Reserve Officer Training Corps) class.

"Our high school was one of the first to institute ROTC, the purpose of which was to become familiar with the Army and receive credits toward graduation; also, I was determined to follow in my father's footsteps," he said.

Lew entered the Army in September 1954, almost 20 years to the day that his father had joined the Army. Basic training was at Fort Ord, California ("it was just a normal 16 weeks of basic training") and Lew selected armor (tanks) as his specialty. For training to serve in a tank unit he was dispatched to Fort Knox, Kentucky; thereafter, he was off to Fort Lewis, Washington, and assigned to the 72nd Tank Battalion (1st Infantry Division).

In December 1954, Private First Class Thornton began the long journey to South Korea, his transport docking at Incheon Bay on Christmas Day. The fighting in Korea, which took the lives of nearly 40,000 American soldiers, had ended on July 27, 1953, with the signing of the Korean Armistice Agreement. The agreement established the Korean Demilitarized Zone (DMZ) to separate North and South Korea and allowed for the return of prisoners of war; however, no peace treaty was ever signed, thus, to this day, the war has not formally ended (and technically continues).

Lew served with the 73rd Heavy Tank Battalion in or near Seoul, the capital of South Korea. He was the commander and gunner of his M-47 "Patton" main battle tank, which boasted a 90 mm main armament (with a range of about 1500 yards), two coaxial 30 caliber machine guns and one 50 caliber machine gun. The mission of his tank battalion was to provide armored support for U.S. and South Korean infantry forces along the DMZ, while also continuing training with both U.S. and South Korean forces. "It was still a tense situation," Lew remembered, "even though the armistice had been signed. Because the shooting, pot shots really, never stopped. But we never had any fear that a full-blown war would break out again. . . We [were] occupation troops and through our presence we were helping to stop another war by preventing North Korea from attacking into South Korea."

When asked what he recalled most about his service in South Korea, Lew responded with a humorous anecdote. "We had something called a 'butt can,' which was about a three-pound can into which we threw our cigarette butts, although we weren't allowed to smoke inside our tank. We had two of these cans and we used one of them to made coffee, the other for cigarette butts!" Let's hope Lew and his crew never mixed up the cans!

Lew was in South Korea for about a year-and-a-half. He then went back to Fort Ord where he was promoted to staff sergeant. He was mustered out of the Army in 1957.

"I've thought about it over the years, wondered what it would have been like if I'd re-enlisted and stayed in the Army. But I decided not to. I was anxious to get back home to be with my family, my brother and parents. My middle brother returned from Germany [where he had served in the Army] about the same time I returned from South Korea," he said.

Back home, Lew found employment at the same firm for which his father worked as a truck driver (the company manufactured concrete) and he worked there for several years. He got married in 1960, the marriage bringing forth a son and a daughter (he would remarry years later). In 1961, again following in his father's footsteps, he became a police officer in Glendale. He also found time to go to college, earning an undergraduate degree in police science from California State University Los Angeles in the early 1970s.

Lew worked with the Glendale Police Department for 23 years, ending his career flying a helicopter.

"I loved [being a police officer]. I loved every second of it," he said. "First of all, I joined the police department because I wanted to get out and help the public, to curtail crime. Also, my dad had been a police officer in Los Angeles."

Following his retirement from the police force in 1985, Lew worked security with a government contractor for the U.S. Air Force at Air Force Plant 42 (Palmdale, California) for 18 years, retiring from this position in 2003.

As I do with each veteran, I asked Lew how he ended up in Tehachapi: "Susan [his second wife] and I liked to get out and travel a bit. We decided to go up to Tehachapi because we saw something about property for sale. We loved Tehachapi, bought a property in late 1985, had a contractor design and build a house, and have been here ever since."

In January 2019, Lew joined the Bear Valley Springs veterans Association, with which he serves as part of the honor guard.

"We conduct parades and also participate in funerals at the Bakersfield veterans Memorial Cemetery. We also support our community. Recently we purchased a flag pole and mounted it in a nice ceremony at a local grade school. We go to Tehachapi High School every year to attend a ceremony in the gymnasium to honor our military," he said.

In April 2020, Lew was whisked away to Washington D.C. (along with two dozen other veterans and their chaperones, one for each veteran), by Honor Flight Kern County. He and his fellow veterans were delighted to visit the moving memorials for World War II, the Korean and Vietnam Wars, as well as other historic sights in the capitol. Lew was most grateful for the experience.

"I treasured every minute of it," he said.

Lew Thornton-we Tehachapians treasure you, your father and your brother, for your selfless service to our great country in both war and peace!