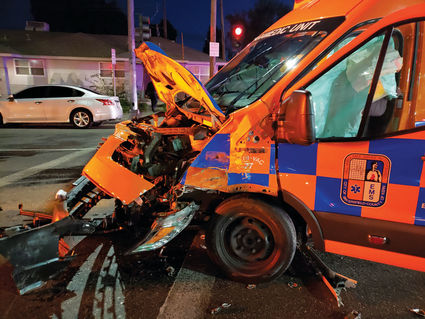 An emergency medical technician and paramedic's measures are being heralded for taking action despite finding themselves in the peculiar situation of becoming victims of a motor vehicle crash.

On the evening of Saturday, February 20, Hall Ambulance EMT Chelsey Hepp and Paramedic Kevin McClanahan were transporting a patient to the hospital [in Bakersfield] in ambulance unit 477 when the unimaginable happened. As Hepp was making a left-hand turn onto E. California Avenue at Haley Street, another vehicle traveling at a high rate of speed ran a red light striking the ambulance's front end and driver's side front quarter panel.

While Hepp said she did not really have time to process what was about to happen, dramatic video from inside the ambulance cab shows her noticing the oncoming vehicle and bracing herself mere moments before the impact occurred.

At the moment of impact, Paramedic Kevin McClanahan was providing a patient care report to the receiving hospital. With his mic keyed, hospital staff heard the collision occur over the radio. Concerned and fearing the worse, they immediately contacted Hall Ambulance's dispatch center to advise them of what they heard.

Hepp recalled hearing McClanahan giving his report, and after the crash, hearing groaning, and that he sounded injured. She asked if he was okay, to which he confirmed he was. The paramedic confirmed that his patient had remained restrained on the gurney and was not experiencing any change from their original condition. McClanahan, who has worked at Hall Ambulance for 15-years, refocused on the task at hand and continued to care for his patient in the back of the wrecked ambulance until another one arrived to take over patient care and reinitiate transport to the hospital.

Shaken, EMT Hepp heard people hitting the window of the ambulance and shouting that someone needed help as they opened the driver's door. Reacting in a manner that is nothing short of astonishing, Hepp, who recently celebrated her fifth year at Hall Ambulance said she felt an automatic response kick in and flashed back to her basic training. She made her way over to the individual to begin providing medical aid-despite having just been involved in a crash herself.

As a matter of public education, Hall Ambulance is releasing photos of the scene and video footage of the crash taken from an on-board camera that recorded forward-facing and inside the cab of the ambulance footage. Hall Ambulance implemented this safety upgrade on every ambulance in its fleet in 2020. In addition, each ambulance is equipped with the Zoll Road Safety device, similar to a black box data recorder. The device monitors dozens of ambulance driver behaviors such as speed, braking, turn signals, and more.

Hall Ambulance hopes the footage serves as a vivid reminder that motorists should pay attention to traffic signals and stop signs and be aware when traveling on roadways, particularly when proceeding through an intersection. EMT Hepp re-emphasized the importance of safe driving by saying, "Regardless of what is going on, it is never a safe option to disobey traffic laws, for everyone else's safety and your own."

As an EMT who is used to responding to others in need but found herself suddenly becoming a "patient" she said, "It puts things into perspective. Even when we are doing the right thing and not distracted driving, accidents still happen. It was strange to be in a situation of doing things right, and to be affected by others not following the rules."