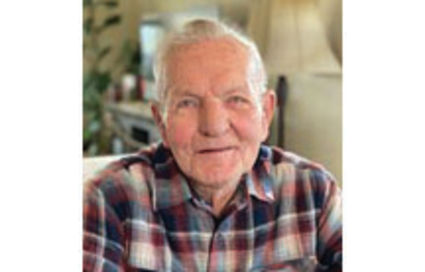 I have fought a good fight, I have finished my race, I have kept the faith." (II Timothy 4:7)

Donald Joseph "Don" Branske, a longtime resident of Tehachapi, California, passed away peacefully, with family at his side in Fresno, California on February 9, 2021.

Don was born in Chicago, Illinois, on September 11, 1930, to Joseph and Gertrude Branske. He was one of nine children. In 1948 at the age of seventeen he joined the US Navy, where he served as a Gunners Mate. Over the next twenty years he continued his service through both the Korean and Vietnam conflicts. Don earned numerous medals and citations, including the Bronze Star, European Occupation and National Defense Medals.

Don married his childhood sweetheart, Arlene Wenskus, on April 14, 1952, and raised seven wonderful children. After retiring from the U.S. Navy, he continued to serve his country with ten years in the Naval Reserves and as a civilian heavy weapons mechanic at the Long Beach Naval shipyard for 20 years.

Donald J. Branske was a true servant of God, his family, and his country. While living in Tehachapi, Don and his lovely bride, Arlene, made many dear friends at their church and in their close-knit community.

Don was preceded in death by his beloved son Michael. Don is survived by his wife Arlene of 69 years; sons, Joseph, Paul, John, and Donald; daughters, Mary, and Anne; as well as 20 grandchildren, many great and great-great-grandchildren.

In lieu of flowers, please donate to the Kern County Honor Flight. This was an emotional highlight for Don to be honored for his service and to honor those who have also served our great country.