Reflecting on 50 years of service to Bakersfield and Kern County

Founded by Harvey L. Hall, the prologue leading to the first chapter of the Hall Ambulance story began on a dare-literally. In 1960, he worked as a hospital orderly when a friend, employed as an ambulance attendant, dared him to ride along. The experience was so exhilarating that the next day, Hall embarked on what, in turn, would result in a 58-year career in emergency medical services.

With 11 years of experience, Hall founded Hall Ambulance Service on February 10, 1971 from his home in Bakersfield with a $15,000 bank loan and two ambulances. Building off his ideals of Care, Compassion and Community, these exacting standards detailed how every customer should be treated, the importance of providing your employees with the best tools to do their job, and why being an essential part of the communities served by the Company matters.

Growth for the Company has come by way of other communities noting Hall Ambulance's reputation for providing exemplary patient care and service. The first expansion was to Arvin, an agricultural community located southeast of Bakersfield, in March 1975, followed by Lamont in 1976. In the late 1970s, Hall turned his attention to taking his ambulance service to Kern County's mountain communities. He signed an agreement with Mountain Memories in 1978 to provide local, reliable service to Frazier Park. The next year he negotiated an agreement with the Tehachapi Hospital District to bring 24-hour ambulance service to its residents.

In January 1994, at the request of Kern County EMS, Hall deployed a fleet of ambulances CODE 3 to cover the majority of eastern Kern County after their provider gave less than an hour's notice before halting ambulance service. That May, Kern County awarded the area to Hall Ambulance, and in June, the Company formed an agreement with the Muroc Healthcare District to provide service in Boron.

The next two expansions came about with similar circumstances when the owners, both personal friends of Mr. Hall, decided to retire. Hall Ambulance began service to Taft and the West Side in March 1995, followed by Shafter in 1999.

In July 1999, Hall realized his dream of becoming the sole ambulance provider for Bakersfield.

In April 2014, Hall Ambulance completed its final expansion during the founder's era, bringing service to Wasco and thus extending the Company's coverage to 88 perent of Kern County's population.

Through the years, Hall Ambulance has been at the forefront of the evolution of EMS innovations and implementations. For example, in February 1975, when Hall Ambulance first introduced paramedics to Kern County (one of the first paramedic programs in the state), after then-Governor Ronald Reagan signed the Wedworth-Townsend Act in 1970, paving the way for this advanced level of care in the field.

In 1991, Hall Ambulance became the first EMS provider in California to be named the "United States Paramedic Service of the Year" by the National Association of Emergency Medical Technicians and the American Academy of Orthopedic Surgeons.

In 2001, the Hall Ambulance EMT Academy was created to train the next generation of EMS workers. This accelerated 12-week training program prepares recruits to start working in the Hall Ambulance 911 system. In 2018, Hall Ambulance developed the Hall Paramedic Academy which provided training for EMTs ready to advance their career at Hall Ambulance. In 2019, the Harvey L. Hall EMS Academy opened, which houses both academies and offers continuing education to Hall Ambulance employees and their public safety partners.

In 2015, Hall championed the cause to find solutions to the growing gap between the cost to provide safety net ambulance service to California's most vulnerable residents and reimbursement for services paid by Medi-Cal. Hall assembled the state's largest ambulance providers (Hall Ambulance Service, American Medical Response, Care Ambulance, Paramedics Plus, American Ambulance, and Rural Metro) under the 911 Ambulance Providers Medi-Cal Alliance to come together for a common goal. Just two years later, the Alliance completed its mission with the implementation of a quality assurance fee (QAF).

Tragically, in April 2018, Hall became ill due to Creutzfeldt-Jakob Disease. Just two weeks and seven hours following diagnosis, his short battle with this degenerative brain disorder came to an end. His passing reverberated throughout Kern County and the ambulance industry, having served not only as the founder of Hall Ambulance but 16 years as the 25th Mayor of the City of Bakersfield. A Community Celebration Honoring the Life of Harvey L. Hall was held at the Rabobank Arena in Bakersfield. All three major television network affiliates simulcast the ceremony featuring nine speakers who reflected on his life's many facets. Prior to the ceremony, a cavalcade of more than 40 emergency vehicles from across the state made their way through the streets of Bakersfield in an honorary procession. To ensure as many Hall Ambulance employees as possible were able to attend, a mutual aid plan was put into effect using personnel and ambulances from seven different companies that traveled from as far as the Bay Area and Orange County to provide support.

Hall and his Company's impact on the ambulance industry was recognized in September 2018, when the American Ambulance Association posthumously awarded the Robert L. Forbuss Lifetime Achievement Award to Mrs. Hall during the organization's Annual Convention in Las Vegas. Later that month, the California Ambulance Association conferred Emeritus Status Recognition upon Hall for his distinguished service to the science and the art of ambulance services during its 70th Annual Convention at Lake Tahoe. 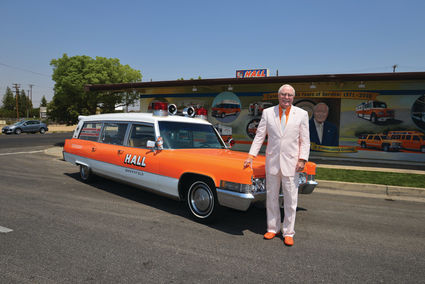 In July 2020, on the 50th Anniversary of the Wedworth-Townsend Paramedic Act, the California Ambulance Association in partnership with the National EMS Museum profiled Harvey L. Hall as one of 17 native Californians for their impact on shaping EMS in the United States.

Hall's vision and legacy are now being carried forward by his wife, Lavonne C. Hall, as president and CEO, along with a dedicated leadership team.

Hall Ambulance has come a long way since 1971 when it started with two ambulances and five employees. Today, it employs over 450 EMS professionals serving 88 percent of Kern County with a fleet of over 100 ambulances, an air ambulance, and a critical care transport unit.

Hall Ambulance's continued success can best be attributed to a shared belief in the importance of adhering to Mr. Hall's standards, also known as the "Hall Way of Doing Things." 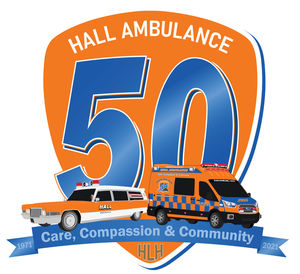