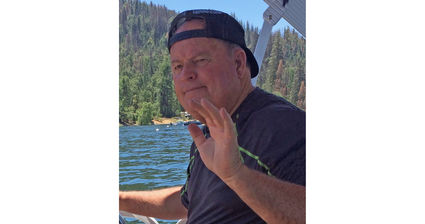 It is with heavy hearts that we announce the passing of Clyde Kenneth Roysden, a beloved husband, stepfather, grandfather, loyal friend and our hero. Kenny was born on September 22, 1949, to Mabel Dene Roysden and Avon Roysden, in San Pedro, California.

He was the fourth child of five, a "wild child" at home and the class clown all through high school. He had the gift of making people laugh throughout his life. After graduating from high school in Long Beach, he joined the Marines where he served in Vietnam in the Infantry as a scout. He was wounded several times in the war and was awarded a Purple Heart.

After he came home from the war, Kenny attended college and earned degrees in avionics/aircraft mechanics and business. During his career he worked for McDonald Douglas and Boeing as a planner, windmill blade design fabricator, aircraft parts salesman, pilot/captain flying tourists over the Grand Canyon and as a bush pilot in Alaska.

Kenny was always passionate about his love of boating, flying, hiking, scuba diving and enjoying his life. He possessed a deep faith in God and spent years studying the Bible, no matter what he would do his best to live by his Christian values. He did not marry until he was 63 years old. He always said he was married to his airplanes and boats and did not have time for a wife! That was until he met Janet, the love of his life. They got married and settled in the Tehachapi mountains in Stallion Springs. Ironically, this city boy from Long Beach became a country boy! He spent the last seven years of his life with his John Deere tractor, his loyal dogs, airplanes, boats, motorhomes and his loving wife. Happy wife, happy life.

In his final year, he battled liver and kidney disease, along with rheumatoid arthritis. He fought like a warrior, but sadly, on the evening of January 29 he went to rest in the arms of our Lord. We are very grateful for the loving care provided by Optimal Hospice and friends Peggy Topp, and Barbara Flemming who made it possible for Kenny to remain at home in the care of his wife.

Wood Family Funeral Home has been entrusted with his care and the private interment will take place at the Bakersfield National Cemetery with Pastor Jeff Kaplan from Shepherd of the Hills Church officiating.