John the Plumber: The plant-based plumber 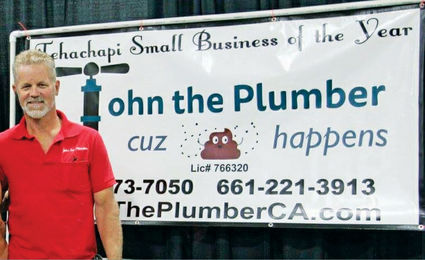 What does being plant based have to do with being a plumber? John Nelson, owner of John the Plumber, concedes that being plant-based really doesn't impact his work as a plumber or his customers, at least not directly.

"Do I feel better since going plant-based? Yes. Do my knees not hurt so much? Yep. Do I rarely get sick and miss work as a result? Yes, to that as well. But even when I hurt I went to work and did great work for my customers," he said.

So how does being a plant-based plumber help his customers?

"When I'm at a customer's home, I often get to chatting about things other than plumbing," John said. "We'll talk about their kids or grandkids, their job or upcoming move. Very often we end up talking about health and those conversations usually result in me mentioning that I've been exclusively plant-based for about four years now. These conversations give me the opportunity to share about the health benefits of being plant-based which is helpful to my customers. I have had several customers tell me that they changed their diet after our conversation."

What exactly does it mean to be plant-based?

"If it grows from the ground, I eat it," John explains. "If it doesn't, I don't. That includes dairy and eggs. I'm not vegan as I will still wear things made from animal products such as leather boots or shoes. But I don't eat any animal products."

His motivation for changing from a meat eater to a plant-based eater came after watching the movie "What The Health."

"Frankly, I was pissed," he said. "The very organizations that are supposed to be providing us with unbiased health information are very heavily influenced by lobbyists for the meat and dairy industries as well as 'Big Pharma.' The result is we are not being told the truth about what is best for us."

The change to plant-based eating was a pretty smooth transition for John as his wife had been plant-based for about six months.

"I told her I would eat whatever she ate for two weeks. At the end of that two-week period, I had lost 10 pounds without even trying and the inflammation in my knees was gone. My two-week experiment has turned into a way of life for me and I have no intention of going back."

John's commitment to a plant-based lifestyle led him to playing with the idea of opening a plant-based restaurant. He even came up with a name for it: Vegan Pleasin' Café. When his wife partnered up with Teresa Dunlop, the owner of Tehachapi Natural Market, at the end of 2019, it was only natural that they would start making plant-based soups, desserts, burritos and salads. Teresa was 100 percent on board with the idea and agreed to add "Vegan Pleasin' Café" to the business name.

"Plumbing pays the bills and is still my first love," John said, "but Sarah and I are having a lot of fun coming up with new plant-based offerings and educating people about the benefits of plant-based eating."

Whether you have a plumbing need or want to hear more about plant-based eating, give John a call at (661) 823-8031. He'll be happy to help you out with both.