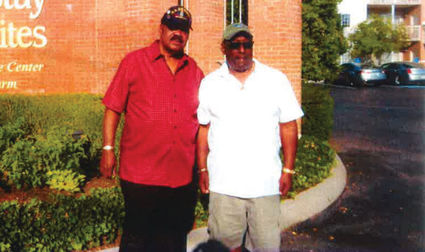 This is the seventh article in a continuing series about local military veterans and their service to our great country.

John and his twin brother were born on April 17, 1942 in Suffolk, Virginia. His family soon moved to Newport News, Virginia, where his father worked at the famous Newport News shipyard and, in the early 1950s, became one of the first African-American police officers to serve with the Newport News Police Department. As John recalled, "Newport News is a military community and I was unaware that I had been predestined to join the military. My home town of Newport News is surrounded by the Navy, Army, Air Force and Coast Guard, so we were exposed to patriotism in school and daily life. My uncles served in the U.S. Army, the U.S. Coast Guard and [we were near] Langley Air Force Base and the Norfolk Naval [base] where aeronautics history was being made."

In 1957, John went on his very first date with a young lady named Rosabelle Jenkins, who had invited him to accompany her to hear a guest speaker at the local Baptist Church. The guest speaker was Dr. Martin Luther King, Jr. In his speech, Dr. King talked about the struggles of black people seeking justice and equal rights; he also opined that, even when confronted with obstacles in life, one should always do the very best he can at whatever his job in life might be. Dr. King's counsel to always "do your best" has inspired John throughout his life and career.

John graduated from Huntington High School in 1960 with the intention of attending Norfolk State College. Unfortunately, family finances precluded sending John to college, thus, at the urging of a friend, he joined the U.S. Air Force. As John remembers, on December 28, 1960, "my service to our great nation began. I departed Newport News for basic training at Lackland Air Force Base, Texas." While in basic, John's aptitude test scores revealed that he was highly qualified in the mechanical field; as a result, he was selected for training at Amarillo Air Force Base, Texas, to become a B-47 "Stratojet" bomber maintenance technician. In May 1961, Airman 3rd Class Ashe was assigned to Pease Air Force Base, New Hampshire, and the 509th Bomb Wing-perhaps the most historic wing in the U.S. Air Force, for, in August 1945, it had dropped the atom bombs on both Hiroshima and Nagasaki, hastening the end of World War II.

At Pease AFB, John was assigned to his first Boeing B-47E bomber, "My crew chief was Harold Bostick, a big tall Texan and I was very intimidated by him; however, he became a key person, trainer/mentor, and a life-long friend. He was a man who did not see color. He enabled me to grow and helped me to achieve more out of life and a successful Air Force career than I could ever have imagined." During our discussion, John noted that he "owed a debt of gratitude" to many of his superiors and co-workers at Pease AFB. "Considering [the state of] race relations in the 1960s, these men treated me like a man, and I came to admire them."

Among John's most memorable experiences as a young Airman were the 13-day Cuban Missile Crisis in October 1962, and the assassination of President John F. Kennedy on November 22, 1963. During the Cuban Missile Crisis, the 509th Bomb Wing was placed on full alert, its B-47 bombers loaded with nuclear weapons and flown to a forward location for potential launch against targets in the Soviet Union. Following Kennedy's assassination, John, now a crew chief, was placed on alert duty ("we were notified that the President had been assassinated; we were upgraded to a higher alert status with a fully loaded bomber with nuclear weapons ready to be launched") and selected to go temporary duty (TDY) for 90 days to Upper Hayford Air Base in the United Kingdom (U.K.). Indeed, during his time at Pease AFB (May 1961 to November 1965), John was often selected as one of the youngest Airmen to perform alert duty with a B-47 bomber fully armed with nuclear weapons in support of our nation during the Cold War.

Following retirement from the Air Force, John went to work for the Northrop Grumman Corporation's B-2 bomber division as an integrated logistics support test and evaluation project manager at both Palmdale and Edwards AFB. He retired from Northrop Grumman on July 1, 1995, and resides with his wife, Maria, in Golden Hills. When asked how he ended up in Tehachapi, he said, "After coming out to Edwards Air Force Base, I became familiar with Tehachapi. I wasn't all that crazy about Lancaster, where I lived for about a year. I drove up to Tehachapi on July 2, 1988, to look around and see what the place looked like. I said to myself, 'I could live here!' I moved to Golden Hills in October 1988 and have been here since." John married Maria (his second marriage) in April 1995. Together they have raised a blended family. 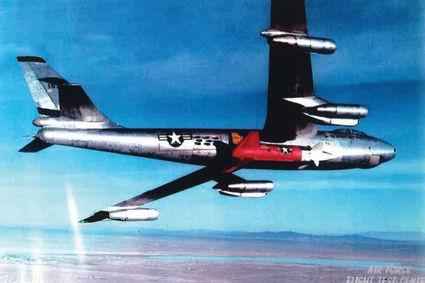 B-47 Bomber with a Rascal Missile over Rogers Dry Lake, Edwards Air Force Base.

As our interview concluded, I asked John, "What would you say to a young person today who is thinking of a career in the military?" To which he responded, "You asked the right guy! I tell young people they should consider the military because it will build character, instill a strong work ethic, teach them a trade, and given them something to build on that will last a lifetime."

John-all of Tehachapi salutes you for your 27 years, one month, and four days (!) of honorable service to our great country!