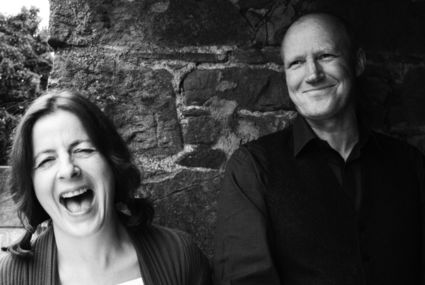 Jim Malcolm is considered one of the finest voices and interpreters of Robert Burns' songs in Scottish traditional music today. He was the lead singer for the world-renowned band Old Blind Dogs for eight years before returning to his solo career as a singer-songwriter. He has appeared at Fiddlers Crossing twice before, in 2017 and 2019, and was scheduled to appear, this time with his wife, Susie, on this very date. When the current pandemic put a halt to in-person live concerts, the Malcolms lost no time in putting together an online, hour-long version of their show. They chose Zoom because it offered them the ability to see and interact with their audiences from the comfort of their home in Perth, Scotland.

A Jim Malcolm concert is always an entertaining mix of his own and traditional songs, including those of Burns, peppered with funny stories and observations in the tradition of Scottish bards through the ages. An accomplished guitarist, he plays mostly in the Celtic tuning dadgad. He is considered to be one of the top simultaneous guitar and harmonica players in the world.

Susie Malcolm is an award-winning singer with a special knowledge of the musical traditions of North East Scotland. She was the first woman ever to win a singing competition for Bothy Ballads (agricultural songs) and has been singing in folk clubs and at festivals around Scotland since her early twenties.

The Malcolms' Zoom-based Sunday afternoon concert will bring a little bit of Scotland and some much needed entertainment directly into the homes of a town that could surely use it right now.

For a video sample of Jim and Susie Malcolm, visit http://www.fiddlerscrossing.com

The suggested donation for the concert is $15 per person, and 100 percent will go to the artists. To gain access, visit http://www.fiddlerscrossing.com and, using the contact form there, request the Paypal link for the Jim and Susie Malcolm concert. When making the payment, please mention this show in the "add a note" area. Once the payment has been confirmed, the Zoom link and passcode for the concert will be sent by email.