Marsha Parker: An army nurse in the Vietnam War 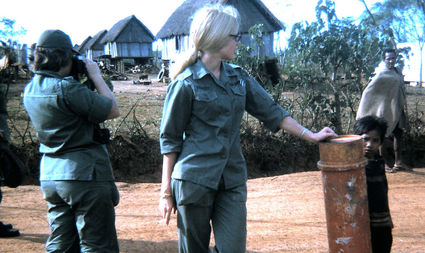 Marsha at the military hospital in Pleiku, Vietnam.

This is the sixth article in a continuing series about local military veterans and their service to our great country.

As always we begin at the beginning: Marsha was born in 1946 in a little town in Ohio. Her father, a former Marine who had served in the Pacific theater in World War II, passed away at the age of 34 (like many Marines, he had contracted malaria during the war, and that had contributed to his tragic, early death). Marsha was only 10 at the time and her mother, a stay-at-home mom, went to school after her husband's death to become a hairdresser.

"That is how she supported us until she remarried," Marsha recalled.

Marsha attended high school in Upper Sandusky, also a small town in Ohio, graduating in 1964. While in high school, she worked at local hospital, in the lab, the laundry, in housekeeping, "wherever there was a little job for a high school kid."

Interested in becoming a nurse from an early age, she took part in a three-year nursing program in Lima, Ohio, graduating in 1967 with a general degree in nursing. She then went back to work at the little hospital in Upper Sandusky, but only for a few weeks. "All of us in nursing school," Marsha noted, "were well aware of what was going on in Vietnam. We knew there was a shortage of nurses. Several guys from my town had been killed in Vietnam. And, remember, at that time, patriotism meant serving. So I felt called to serve in the military."

Marsha joined the Army in late 1967; "it was Army all the way!" Basic training took place at Fort Sam Houston, San Antonio, Texas.

"I don't know if people realize that even nurses [in basic] are put through field exercises. We had to run a map course, to learn how to find our way around with a compass if we were lost in the middle of nowhere. It was a bunch of young women, not all in the greatest shape, trying to find their way back to base; about two-thirds made it back, the others had to be rescued! During basic, our platoon leader was an older, experienced surgical nurse. She kind of held us all together. She would lead us on marches around the quad and shout out orders, including one she had made up: 'hippity hop platoon stop!' This drove our drill sergeants nuts and she'd do it to antagonize them. When one of them [protested] she would respond: 'my dear, you need to watch your blood pressure!' Eventually, they threw up their hands and let her do what she wanted. We had discipline, but not quite the kind of discipline the drill sergeants wanted us to have."

During basic training, to prepare the nurses for what was to come, they had to practice on goats shot with high-velocity weapons (such as an AK-47), learning how to stop bleeding, suture and close up wounds, remove dead tissue, etc. "When you shoot something with a high-velocity weapon, it literally explodes the tissue, blood vessels, nerves inside the body. That's why they did it. They wanted to show us how to deal with those kinds of wounds. All of us came out of that a little shocked. Most of us had never seen anything like that." Following basic training, Marsha was assigned to Fort Belvoir, Virginia, working in orthopedics. Two months later, she got her orders for Vietnam.

Marsha went to Vietnam in early 1968, which witnessed the massive Tet Offensive launched by Viet Cong guerrillas and North Vietnamese regulars and resulted in a sharp decline in support for the war among the American people. She was assigned to the 71st Evacuation Hospital in Pleiku, which also hosted an Army division and an Air Force base. The hospital included medevac helicopter pads, an emergency receiving area, surgical and recovery units and rows of medical surgical facilities each with 40 patients. As Marsha remembered, "The medics on board the medevac helos – we called them 'dust off' units – were amazing; by the time the wounded reached us, 75 percent of them had been stabilized." And because the medical care provided by Marsha and the other nurses and doctors was so good, 92 percent of the wounded survived their injuries.

Following a thorough orientation to familiarize the mostly inexperienced nurses with every facet of their job, Marsha was assigned to a med/surg (or medical surgical) unit. Because the wounds sustained by soldiers were dirty with debris and often contaminated with human or animal feces (e.g., from enemy booby traps), which could result in life-threatening infections, the surgical units employed a technique – delayed primary closure – that was experimental at the time, if now commonplace. "We would open the wound and put in a fine gauze. After it had dried and attached itself to the tissue, we'd tear it out removing any debris or dead cells that were left. That was extremely successful for healthy healing. We saved a lot of arms and legs that way."

Marsha and her fellow nurses worked six 12-hour shifts a week, "unless there was a push, meaning we got unexpected volumes of wounded, then we'd work for 24 to 36 hours, or until we got everyone taken care of." Indeed, the duties of a nurse in Vietnam were relentless, unforgiving, and, at Pleiku, often interrupted by enemy mortar attacks, which resulted in no loss of life during Marsha's time there. "A lot of the nurses returned from Vietnam with PTSD [Post Traumatic Stress Disorder]. And I see the same look on the faces of the nurses now working with COVID-19," she said.

At Pleiku, Marsha met the singer and actress, Martha Raye, who came through the hospital on several occasions, "and really brightened up the troops. She was a very unique woman. She was intensely involved with the troops in the field and made many trips to Vietnam. She was out to save each and every guy." (Note: Ms. Raye became a colonel in the Army Reserve and is the only woman buried in the special forces cemetery at Fort Bragg, North Carolina.) While in Vietnam Marsha also met her first husband, an Army helicopter pilot.

After being outprocessed from the military, Marsha returned to the U.S. in early 1969. She went to work as a civilian nurse at Fort Sill, Oklahoma, and, in the years that followed, accompanied her Army husband to other bases, working in doctors' offices and hospitals. While at Edwards Air Force Base in the late 1970s, Marsha went back to school, eventually earning a B.A. in archaeology from the University of Maryland and an M.A. in health services administration from Chapman University in Southern California (1984). Along the way, she had two children: Chris, a boy, born in 1969; and Kelly, a girl, born in 1974. (Following a divorce, Marsha remarried in 1990.)

Also in the late 1970s Marsha began her participation in a decades-long military study driven in part by concerns over exposure to the defoliant Agent Orange and the long-term impact of PTSD (the study was recently published). Near the end of the study one of her interviewers observed, "You are the one person I've interviewed who has seemed to become stronger over the years." Marsha attributed this to the wonderful support she had received from back home. Marsha had been taken by the plight of the local Montagnard villagers and had done all she could to help them (as had many other nurses). "I was lucky enough to link up with the special forces in Pleiku, and when they went out I just went with them [into the villages]." When the folks in Upper Sandusky got wind of Marsha's charity, they responded by sending all kinds of supplies – soaps, bandages, bedding, iodine, anything they thought might be of help to the Montagnards. "I was in despair sometimes looking at how horrible the lives of some of these people were; then looking at our own guys, and how bad off they were. But I never fell into the depression and hopelessness that some of my colleagues did. Some of the nurses were overwhelmed [because] they felt they could never do enough for the men. They never had the kind of support system I had." 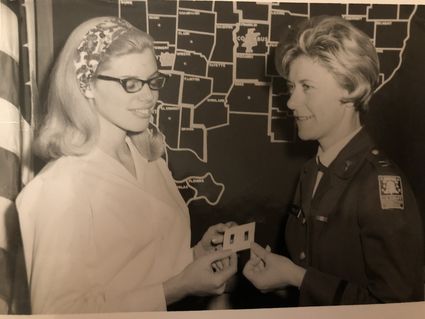 Marsha getting her bars and being sworn in.

And, as always, my final query, "When and why did you move to Tehachapi?" As Marsha explained, she had worked at Antelope Valley Hospital while her first husband was stationed at Edwards AFB, and had gotten to know some people from Tehachapi and learned a little about the town. After remarrying, she and her husband moved to Bear Valley Springs in 2002.

Martha, you are a true American patriot and we Tehachapians salute you for your brave and selfless service to our country!