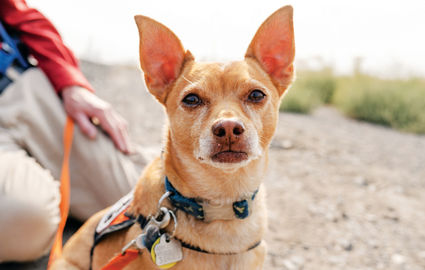 After returning to Tehachapi, shortly before Thanksgiving 2019, I made arrangements for another pre-Christmas cruise to the Mexican Riviera. San Pedro departure, returning to San Diego.

I usually drive to the pier parking in the ships parking lot for these short cruises as San Pedro is only three hours from our home. This cruise would be different because getting from San Diego back to the car would be challenging for me. Pepe and I take public transportation whenever possible, since Pepe is a good traveler and is easy to handle in the public areas. We took Metro Link from Lancaster to Los Angeles, then called Uber for a ride to the pier.

I have learned, the hard way, not to alert the Uber dispatcher that I have a dog with me. The cars I have ridden in are new; the drivers are proud of the cars and are not too keen to have a dog in their car. When they show up to pick us up for the ride I assure the driver that I will hold Pepe on my lap. Of course, since Pepe is ADA Certified they must take us to our destination.

During our stop in the Port City of Mazatlan, I made arrangements to spend January and February 2020 in a condo.

We were back home a few days before Christmas and spent the next few weeks planning our two-week stay in Huatulco, Mexico in February, with a flight out of Las Vegas on February 1.

I had been having some breathing issues with a very heavy cough. My doctor had X-rays taken and, finding nothing out the ordinary, suggested OTC medication for allergy relief. The cough syrup did nothing for the cough which was growing worse. Also, I tired easily and had breathing difficulties when I tried to do too much physical activity. I attributed the problems to my age and the allergy.

Our flight to Mexico was a red eye departing Las Vegas Airport at midnight. After parking the car in airport parking, we took the shuttle to the terminal. By the time I got into the terminal with baggage and Pepe, I was exhausted. About half-way to the counter I started feeling dizzy and dropped to the floor just before passing out. Other passengers got excited, of course, and called security. I had pretty much come around but was still on the terminal floor with Pepe tied to my side by a carabiner. I kept telling everyone, "I cannot get my breath." Security called for an ambulance.

I was hooked up to oxygen with one EMT checking my vitals and talking on a radio with the dispatcher. We were taken to Sunrise Hospital near downtown Las Vegas. The hospital medical team had difficulty finding what was causing my breathing difficulty. An X-ray and an MRI both were normal, a C-Scan revealed a massive blood clot deep in my lungs. Pulmonary Embolism.

I was going to be in the hospital for a while with surgery and recovery. Pepe, as a Certified ADA dog, could be with me. Obviously, his presence would be more of a hindrance than as a helper.

One of the Lung Specialist Nurses took Pepe to her mother's home. Her mom had two small dogs and she felt that Pepe would adjust well with them.

I was in the ICU for four days and another five days in recovery. I am in fairly good health, but nine days in a hospital robs the body of muscle strength. The Therapy Staff had me walking the hall for the last three days. I was able to convince the hospital that I could drive myself home. When I was discharged from the hospital I contacted the nurse to get Pepe returned. She delivered him to me with a new, heavy duty bag, emblazoned with dog photos. Inside the bag was new food and water dishes, a doggy bed and a dog sweater. He was wearing a harness instead of his vest and wore a new collar with new leash attached. His nails had been professionally trimmed and he smelled of perfume. We spent our Mexico Riviera vacation in Las Vegas with me in the hospital recovering from surgery and Pepe in what could be best described as a "Canine Resort."

I was ready for at least a short winter break and made last minute arrangements for a five day Ensenada Carnival cruise out of Long Beach, followed by a two week Mexico cruise in March. Last minute cruise reservations are very reasonably priced. A small inside cabin for $400. Then upgraded to a cabin with a patio for $200 more. A full week on the Mexican Riviera in a luxury suite, travel, all gourmet meals and entertainment included, for less than $100 bucks a day...can you believe that?

Little did I realize that there was a pandemic coming and some of those winter plans would change.