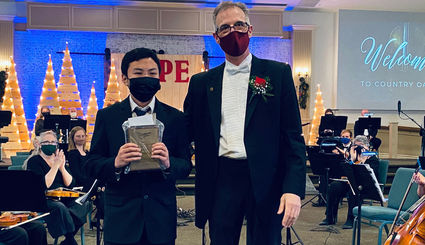 The award consists of a $1,000 scholarship and a plaque. The winner's name is also inscribed on the perpetual plaque which is exhibited at the fiddle contest each year. The award goes to the fiddler who best embodies the spirit of Big Howdy Forrester and is funded by Howdy's son, Bob, who lives in the Nashville, Tennessee area. District 3 started the scholarship in 2007, in conjunction with the publication of "Fiddler of the Opry: the Howdy Forrester Story," which is Howdy's biography.

This award would normally be made at the annual Fiddlin' Down the Tracks fiddle contest, but this year's contest was canceled due to COVID-19. Since B.J. also plays in the Tehachapi Symphony, District 3 asked the Symphony to present the award at their Symphony concert, which was live streamed onto their Facebook page.

The Symphony had an almost full page story about the concert in the Bakersfield Californian the day before. The award was made during the live stream.

B.J. Zheng has won many medals and trophies for his fiddling, and he always plays some of Howdy Forrester's tunes in the contests. In addition to being a first violin in the Symphony, B.J. is the Concertmaster of the Tehachapi Strings Orchestra, plays first violin in the Symphony's Young People's String Quartet and is an advanced pianist, for which he has also won awards.

He is a straight "A" student at Tehachapi High School and plans to attend college in September 2021. He will be majoring in medicine and wants to become a doctor, although he says that he will never give up his music playing.