A Tehachapi wreath from native and heirloom plants 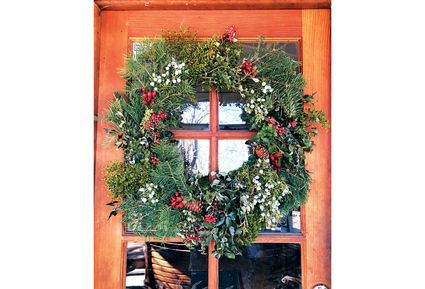 I decided to help get in the Christmas spirit, despite this strange and mournful year, I would make a wreath using only materials gathered locally, mostly from Tehachapi natives with a few heirloom plants incorporated as well.

Among the natives that I collected from were California Juniper, White Fir, Creosote Bush, Canyon Oak, Jeffrey Pine, Buckbrush and some Staghorn Lichen found under pine trees after having been dislodged during the recent storm.

The heirloom components included rose hips from a rose called the Oregon Trail Rose, also known as Harison's Yellow or the Yellow Rose of Texas, which the Brite Family reportedly brought from Texas in wagons when they came here in the 1850s. I used to work at the Mourning Cloak Ranch and Botanical Garden on Old Town Road, and one spring day the wonderful and amazing Ed Sampson, the patriarch of the Mourning Cloak Ranch, and I went to the site of old Brite family homestead in Brite Valley and collected a number of cuttings.

We brought these back to the Mourning Cloak greenhouse and placed them under lights in a sand and vermiculite rooting medium. After about a month, close to 20 of the 30 cuttings we had taken successfully rooted, and these were transplanted into small pots and then into successively bigger pots as they grew.

These Tehachapi heirloom roses were sold at the twice-annual plants sales that we used to have at the Mourning Cloak each Labor Day and Memorial Day weekends. This rose continued to be propagated from the original cuttings.

The Oregon Trail Rose was first marketed in 1830, and it has become naturalized and still persists at long-abandoned homesteads and ranches in many locations throughout the West. It is quite thorny, and produces many red rose hips in autumn. It got the name "Harison's Yellow" because it first appeared as a volunteer or chance hybrid at the New York City home of an attorney named George Harison.

The other heirloom plant that I incorporated in the wreath were Cotoneaster berries. This is a genus of more than 70 different species that are related to hawthorns, pyracanthas, photinias and rowans. They produce red berries in late summer and autumn, which birds love to eat.

Although the word looks like it would be said like "Cotton Easter," it is actually pronounced as "cah-tone-ee-aster." My family planted some of these hardy, drought-tolerant shrubs on their little Tehachapi farmstead in the 1920s. They are still growing here nearly 100 years later, and I added some of them to the wreath.

I would like to wish everyone a Merry Christmas from Tehachapi, and I'm hoping that 2021 brings us a healthier, more peaceful and prosperous year.