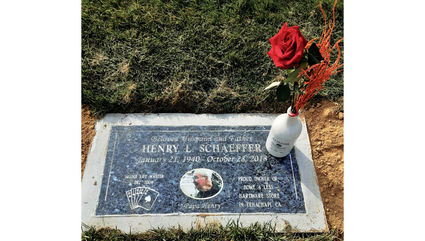 A tombstone in memory of Henry Schaeffer, a former Tehachapi business owner, was recently placed at Tehachapi's Westside Cemetery. It is a phenomenal blue pearl granite stone from Norway, provided by Sunset Monuments. It is located at Lot 8 Plot 13, Section A. Henry died October 28, 2018.

When Henry closed his Home for Less Hardware Store, there was a Facebook posting by Kenneth Hetge, former Tehachapi City Councilman. It read as follows: "I am not typically emotional about businesses coming and going, but with Henry's, it is much different. The store and the man behind it were a special part of our community. Henry's good will in our town ran deep. His ability to remember the location of every widget in his store was impressive. If he didn't have what you needed, he had the uncanny ability to find a solution."

The post continued, "setbacks and adversity solidified Henry's strength in the community. His constructive conversation regarding the City of Tehachapi will be sorely missed but never forgotten."

In addition to the tombstone, there is a bench in Marx Park which commemorates the life of Henry Schaeffer. He has not been forgotten. His contribution to the city, and his good deeds live on.