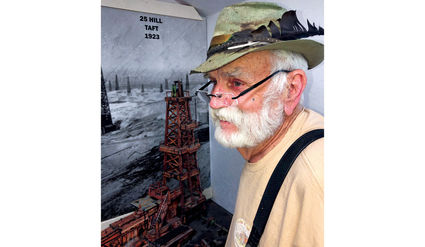 Rufus Thomas in his caboose-like studio with one of his oil derrick models.

Rufus Thomas is a Tehachapi man who had an interesting career, spending 40 years working for Southern Pacific Railroad (later Union Pacific) and retiring after many years as a conductor. He has filled his retirement years as an artist working on various projects, drawing, painting and building scale models of the old wooden oil derricks that he grew up around in the Taft area.

The story of Rufus Thomas begins on June 10, 1939, when he was born to John and Grace Thomas, joining a family that would include seven boys and two girls. One of the many Kern County places the Thomas family lived was outside of Taft, in an area that was still home to many fading old wooden oil derricks.

The Midway-Sunset field at Taft was established in 1889 and at its peak was forested by an astounding 7,000 wooden oil derricks, or towers, around each oil well, reaching 100 feet into the air. One of these, the Jameson #17 Derrick was built in 1917 and it was the very last one standing in the entire state until it was taken down in 2003.

Rufus and his brothers used to play around an old derrick and the attached wooden buildings. It was a dangerous playground, but it's what they had, growing up outside Taft in the 1940s.

When Rufus was just two years old, he and his older brother Tommy, who was only four, were playing around the derrick on November 28, 1941. Tommy walked out onto an oil sump, where thick old oil had congealed into a tar-like consistency, which would support the weight of a small curious boy in cold weather. That November day was unusually warm, however, and when Tommy was well out into the oil sump, the surface gave way and he pitched forward into the sticky goo and was trapped.

Brave little Rufus, just a toddler, ran home and found his mother, and used some of the only words he knew to say, "Oil, Mama, oil!" repeatedly while pulling on his mother's apron in the direction of the oil sump. She followed him and was horrified to find 4-year-old Tommy sinking into the oil tar. She managed to get a piece of tin under Tommy's chin to keep his face from submerging and an emergency call went out to the Kern County Fire Department.

Firefighters arrived and laid planks out across the thickened oil, and crawled on their bellies to reach the boy. Together with Tommy's mother that were able to extricate him after an hour of effort. Tommy was hospitalized overnight and had to be laboriously cleaned with tetrachloride, but he ended up no worse for the experience.

Tommy grew up to earn two PhDs and became a much-loved college professor and educator, while Rufus didn't stick with schooling: "I only had an 8th grade education, and happy to get that," Rufus told me. His beloved brother Tommy died in Bakersfield recently, another victim of COVID-19. Another brother, Jerry, 85, is still working as an inspector for Lockheed after 62 years of service.

Tommy had been the family archivist, and with his passing Rufus ended up with a treasure trove of old family documents. Rufus's father was a cousin to the famed broadcaster Lowell Thomas, and the family had roots in Ohio and West Virginia. "We're glad, because both of those were free states," Rufus says.

One of his relatives, Daniel Thomas, was killed during the Civil War on June 24, 1864 at Greenbriar Gap, West Virginia. "He was only 17 or 18 years old, a private with just 100 days of service," Rufus noted, "They just taught him how to get killed."

Rufus worked for the railroad from 1964 to 2004, and on one cold morning when Rufus was driving to Mojave to report for work, he encountered a man whose car had broken down. Rufus is a friendly, gregarious man, so he picked up the guy, who turned out be Arthur Thomas, a vocational art instructor at CCI. The two ended up becoming good friends, and Arthur got Rufus into painting, which awakened an artistic side that Rufus had never explored.

In the years since then, Rufus has used his considerable talent to create lots of artwork, from paintings and drawings to his scale models. He builds model oil derricks to scale without plans or blueprints; he just relies on his memory and old photographs. There are all kinds of details, including tools and ancillary structures. Some of his models have been on display at the Tehachapi Museum.

You might be familiar with Rufus's artwork from another well-known location: Kelcy's Restaurant, where there are Old West silhouettes around the top of the dining room. Rufus did most of the drawings, and the late Kelcy Owens cut them out of plywood, painted them black, and back-lit them to create the scenery around the top of the room.

Rufus is such an affable, interesting person that he has legions of friends, including local car enthusiasts. Rufus and his wife Dianne, who worked at the local post office for many years as well as serving as postmaster for both Independence and Inyokern, have been very active members of the Thunder on the Mountain car club.

Rufus has a small studio built like a caboose in their back yard. A sign above the door says "Rufus's Crummy," using an old railroad slang term for caboose. It is filled with his sketches, drawings, models, etc., and it is one of his happy places. 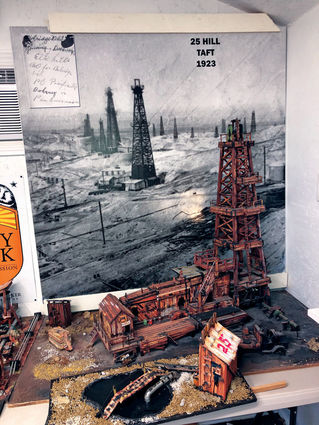 A model of an oil derrick and attached wooden buildings that Rufus built, in front of a historic photograph of the oil fields outside Taft.

I have had the pleasure and honor of knowing Rufus Thomas virtually all my life, since he was a friend to my Uncle Henry Hand, and this big, kind, entertaining man has helped make Tehachapi a more fun and interesting place to live. Thank you, Rufus! Kern County has been blessed to have you and the Thomas family. Enjoy the beauty of life in the Tehachapi Mountains.