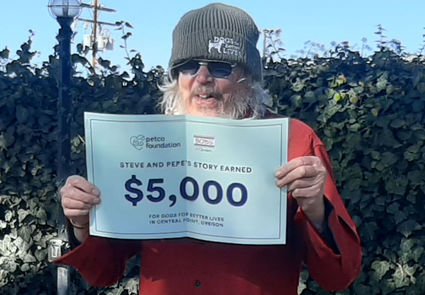 Tehachapi resident Steve White was thrilled when he learned that he and his hearing dog Pepe were to be one of the winners of the 2020 Petco Foundation Holiday Wishes contest.

"It is a pretty 'biggie' deal contest." said White. "The winners get anywhere from five thousand to one hundred thousand dollars donated to the rescue facility where their pet came from and the pet owners get a shopping spree at Petco and Sketchers Shoes. Thousands of entries are submitted every year. The winners are notified that they won from the rescue facility, but the amount is not revealed until the last minute."

Since 2013 more that 15,000 pet adopters have shared stories of the ways in which their pet has enriched their lives resulting in $5 million in Holiday Wishes grant awards to the welfare organizations that made the matches possible.

White said that he submitted his Pepe story at the suggestion of friends. After writing the story, he said he had to cut it down to 500 words and was not sure he was happy with the result but sent it anyway. He was sure it would not be a winning story so was shocked and excited when he found out that he and Pepe's trainers at Dogs for Better Lives in Central Point, Oregon would be one of the winners.

When White's hearing began to deteriorate, he began to think about a hearing companion dog. He heard about Dogs for Better Lives from Canine Creek, a local pet store. He completed the application process which included a study of his lifestyle and his requirements in a hearing dog. Steve is a very active senior and travels often to places like Alaska and Hawaii so it was decided that a small dog would be best.

Pepe, who is now almost eight years old, was found in a shelter in Fresno where he had been for seven months. He was on TV as a Pet of the Week several times but was never adopted. He seemed to have promise as a hearing dog so he was sent to Oregon for training. Although only about one out of every four dogs actually make the program, Pepe came through with flying colors and was delivered to White in November of 2016. The two are inseparable and have since traveled the world together.

Laura Encinas of Dogs for Better Lives (DfBL) in Fresno was notified by Petco that White was a winner and was sent the prize as a letter sealed inside a box. It was arranged that she would bring the sealed box to Tehachapi to make the presentation on December 1 which just happened to be "Giving Tuesday." 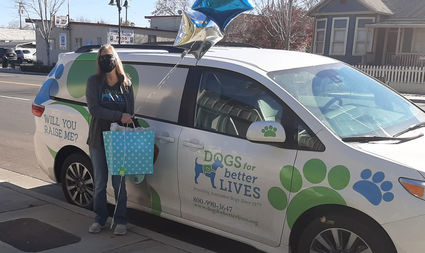 "The Opening" took place at a picnic table in Railroad Park under the oak trees with a few friends in attendance – all wearing masks and social distanced. Encinas presented White with a large bag tied with balloons containing the sealed box. The box contained a pair of brightly colored Sketchers deck shoes for White and a Petco gift card which White said he planned to donate to Valley Animal Shelter in Fresno, the agency that had patiently kept Pepe for the better part of a year. Also included was a book of pictures of the winning dogs, their owners and a brief description of their stories. Most of these dogs were rescues.

Inside the book was an envelope that said "Do not open until December 17th," however Encinas encouraged White to open it. There on a card printed in large letters was "Steve and Pepe's story earned $5,000 for Dogs for Better Lives."

In the bottom of the bag was a Tshirt that said, "My Adopted Pet Changed My Life." Tearfully White admitted that Pepe had truly changed his life for the better and said, "I am so privileged to be a part of this Grant."