Whether by train, ship or plane, U.S. Army Veteran Daryl M. Black got it to its destination! 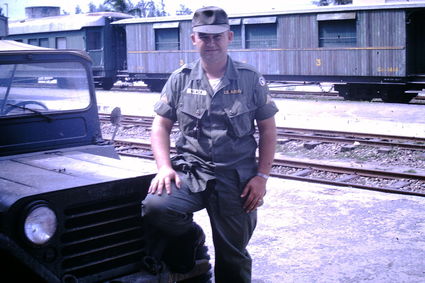 Born in Independence, Iowa on June 20, 1934, Daryl Black was the oldest of three children in his family.

As he fondly recalls, "Mom always said I was born first so I could take care of [my parents'] two younger daughters." Daryl's father was a machinist with John Deere. In 1951, the family moved to Waterloo, Iowa, where he completed high school, graduating in 1953. He had played football in high school, and, growing up with a fascination for trains like so many young boys, also found employment at the railroad in Waterloo as a switchman. As Daryl admitted, this was quite a responsibility for a teenager, "but I was well supervised." Daryl did not go to college, but in October 1953 he took on an even greater responsibility, getting married to his high school sweetheart, Jackie, whom he had known since kindergarten.

After completing basic training at Fort Bliss, Texas, and, due to his earlier experience as a railroad switchman, after a brief stint at transportation school at Fort Eustis, Virginia, Daryl began a nearly 20-year military career in transportation services that would take him over much of the world. Among his initial assignments were: Bremerhaven, Germany (1955/56), where he processed U.S. military personnel coming in and out of the port (he made Private First Class during this first major assignment); Fort Ord, California (1958/60), where he worked on flight scheduling; La Rochelle, France (1960/63), where he supervised a transportation warehouse (the warehouse was a WW2 German Navy torpedo storage bunker, with 8-foot thick ceilings, and 8- to 10-foot thick walls!); and Fort Irwin, California (1963/65), where he supervised the off-loading of tracked vehicles (including tanks, tracked howitzers and armored personnel carriers) from the railroad and shepherded them back to Fort Irwin, where units were building up for Vietnam.

These first 10 years of Daryl's military career brought more than a few highlights. In France, he observed the filming of Darryl F. Zanuck's classic war movie, "The Longest Day," much of which was shot just off the coast of La Rochelle on an island that still had many intact German WW2 bunkers. (Daryl would spend two months shipping military equipment back to Germany, including vehicles and tents, used by Zanuck for the movie.) Yet the most noteworthy highlights of this period were the births of his and Jackie's three daughters in 1957, 1959 and 1963. (Jackie had joined Daryl in Germany in 1955 after completing her training as an RN.)

In December 1965, Daryl left Fort Irwin and arrived in Vietnam in January 1966 (his family was now in Barstow). While in Vietnam, Daryl took part in port operations at Na Trang, his many mission activities embracing the construction of port infrastructure, including a pier, and the processing in of U.S. troop transports.

About his Vietnam experience he says: "I don't even like to talk about it now, but we lost some people" to Viet Cong guerilla activities. While he did not take part in any combat at Na Trang, he did see the powerful C-47 gun ships, called "Puff the Magic Dragon" in the idiom of the Vietnam soldier, in operation not far from his base.

Daryl returned to Fort Irwin in January 1967. In December, Daryl, his wife, and three daughters left California for another adventure-this time in Cadiz, Spain, where Daryl was assigned to the U.S. Army Transportation Terminal Unit there.

"This was strictly nothing but port operations. Loading and unloading cargo for the USAF and the Navy. It was a great [3-year] assignment, a small operation and everyone enjoyed it; everyone had their family with them," he said.

Daryl, Jackie and their children returned to the U.S. in December 1970, and, after getting his family situated in Southern California, the peripatetic Army veteran was off to South Korea in January 1971. Again, his mission was to fulfill military transportation requirements, in this case including requirements for various missile sites. Back in the U.S. by the beginning of 1972, he completed one more assignment (Army sub-port in Long Beach-San Pedro area) before retiring from the Army on June 30, 1974 with the rank of E-7 (Sergeant First Class).

Looking back, Daryl recalls: "I had not planned on staying in the military when I went in, but when I realized opportunities with the civilian railroad were not what I had hoped for, I decided to stay in. I had some good assignments and I was very happy to have my family with me; we spent 10 years together in Europe."

Daryl and his family remained in Orange County after his retirement (they had moved to El Toro in 1972 after Daryl returned from South Korea). The former high school railroad switchman and Army transportation veteran worked in civilian life as a traffic manager and warehouse supervisor for a consumer hardware company. He retired in 1986. 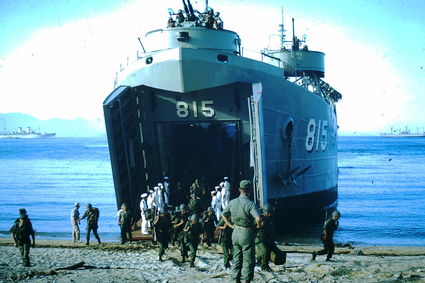 Daryl and Jackie left El Toro for Tehachapi in late 1993. Their oldest daughter and her family had moved to Tehachapi several years before, which, no doubt, influenced their decision to make the move. Moreover, in 1964/65, Daryl had come through Tehachapi-and been impressed with what he saw-while moving troops from Fort Irwin to the Oakland Army Terminal. He and Jackie love the "easier way of life" here and being close to family.

We Tehachapians salute Daryl Black, his wife, Jackie and their three daughters for the many sacrifices they made serving our great country.