By John Nelson
John the Plumber 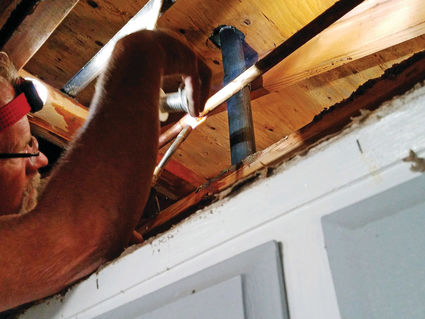 Tehachapi has already experienced below freezing overnight temperatures and there are more to come. When that happens water lines freeze and burst causing thousands of dollars worth of damage to homes and their contents.

John Nelson, owner of John the Plumber, has seen the devastation resulting from breaks of frozen water lines and wants to help you avoid that.

"I've walked into homes where the entire ceiling has fallen into the living room, destroying the entertainment center. I've seen kitchen cabinets ruined. I've seen priceless family photos that were stored in boxes in the garage turned into a soggy mess when an overhead pipe burst. It's never a scene I like coming upon as it's really quite sad and it usually could have been avoided," John said.

What can a resident do to avoid all of this?

"About half of the calls we get for water lines that have burst due to freezing are for homes that were vacant at the time of the break. Residents will go away and turn the heat down to save money on their utility bill. What they should be doing is turning the water off," he tells us. "I think the main reason people don't turn off their water is that they don't have an easily accessible water shut off for their home. We highly recommend that everyone know how to shut off their water and if they don't have a shut off valve, have one installed. If you absolutely can't do that then have the water agency that services your home shut the water off at the street when you leave."

"Another thing we see a lot of, especially in the desert communities," he continues, "is that residents with evaporative coolers on their roofs forget about that tiny copper line that carries water up to the unit. Those lines will crack open after a bitterly cold night but instead of a gush of water that's easily noticeable, they will seep a steady stream that eventually saturates right through to the ceiling below. Don't wait until the first frost to turn off the water to those lines. There's usually a simple little valve that's easy to turn off right where the line attaches to the outside hose bib. If it gets hot again and you want to use your cooler just go turn the water back on."

One of the biggest weak spots in homes, he tells us, is in the garage.

"It is very common to have exposed water lines running through the rafters," John explains. "Garages aren't heated so those exposed lines are very vulnerable to cold. Wrap those pipes in heat tape and insulate them but it's very important to check the heat tape frequently to make sure that it's still working. In a pinch, close all the doors to the garage and run a space heater to warm it up a bit but do not leave the heaters unattended overnight."

Don't wait until your pipes freeze or burst to take action. Call the folks over at John the Plumber (661) 823-8031 or (760) 373-7050 and have them do a winter check on your property. They can help you avoid the costly damage and heartache that comes with broken pipes.