Season of change: Autumn returns to the Tehachapi Mountains 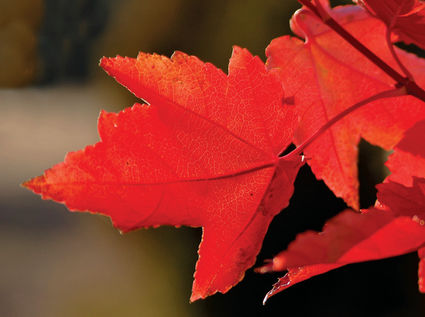 While our native trees mostly have subdued autumn colors, ornamentals like Liquid Amber and Scarlet Maples have added to our fall palette.

Autumn has returned to the Tehachapi Mountains. Nights have grown cold and days are shorter, though often still warm. After a long Southern California summer, a different season now cloaks the land. The colors change, some birds leave while others arrive, reptiles disappear and most broadleaf trees let their leaves drift downward. Even the air feels different.

All living things recognize this changing of seasons, as summer fades and winter appears on the horizon. So how do they respond? Let's look at some of Tehachapi's plants and animals...

The oaks are dropping the last of their acorns. It was a productive year for some oaks – many Blue Oaks (Quercus douglasii) were dripping with acorns. Biologists refer to this as a mast year, when wild nut trees yield a bountiful harvest.

Other species, like Black Oaks (Quercus kelloggii) and Valley Oaks (Quercus lobata) were not as productive this year, but there has still been lots of acorns available for the wildlife that depends on them. This long list of acorn-eaters includes Black Bears, California Mule Deer, Acorn Woodpeckers, Steller’s and California Scrub Jays, Merriam’s Chipmunks, Western Gray Squirrels and many, many more.

Some trees have lost their leaves, and others have changed to lovely autumn shades of yellow, golden, peach and ember red. While most of our native trees have subdued autumn colors, the ornamental woodland that we have planted around our parks, buildings, streets, and parking lots now glows with fall color.

Our native tree flora consists of about 25 species. Humans have added at least 100 additional tree species in the Tehachapi Mountains. And as much as I love our hardy, well-adapted native trees, I also welcome the diversity that ornamental trees have brought to our landscape.

We’ve all noticed the large numbers of Turkey Vultures making their annual migration through Tehachapi Pass in September and October, but they’re not the only birds on the move. Other summer birds like Bullock’s Orioles, Western Tanagers, Cliff Swallows, Western Kingbirds, House Wrens and others have also left.

Arriving birds include Dark-eyed Juncos, White-crowned Sparrows, many species of waterfowl and additional raptors like Cooper’s and Sharp-shinned Hawks that swell the ranks of our local populations of them.

Reptiles, of course, have already sought out the relative safety of their winter hibernaculum. For a small lizard, this might simply be underneath a thick piece of tree bark on the tree where they spend most of their time. For a rattlesnake, this might mean travelling a short distance overland to reach a protected cavity deep in a boulder outcropping, where other rattlesnakes in the area might also overwinter together.

Most insects can’t take cold weather, and they must either migrate like Monarch butterflies and some dragonfly species, retreat underground or to some other shelter, or simply die off and leave next year’s generation behind in the form of eggs in soil, on plants, in water, etc.

An exception is Convergent Lady Beetles, which congregate by the thousands to overwinter in the mountains, usually near a little creek or water source. They spend the winter huddle together enmasse, emerging somewhat on warm days and then retreating again on cold days.

Mammals try to put on weight to help sustain them through the coming lean months. Most will stay active, for our open winters aren’t cold enough or long enough to cause many mammals to hibernate.

Mule Deer bucks and American Elk bulls will be dropping their antlers after the autumn rutting season is over, and the fawns have largely lost their spots and are about two-thirds grown.

There is a killing frost predicted for Saturday, November 7, which will end the season for tomatoes and many summer flowers. It has been a good year for many plants, despite how humans have been adversely impacted by 2020.

Now we just need to hope that the changing seasons will be bring rain or snow. Drought is always just a few missing storms away in California’s Inland Ranges, and it has been many months since we had significant precipitation. 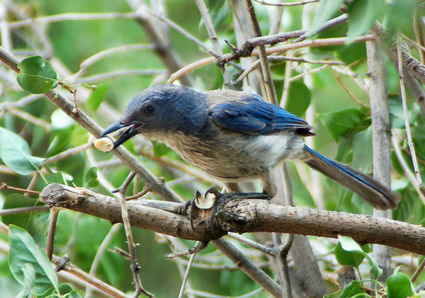 California Scrub Jays like this one have been busy gathering nuts this fall.